Supporting parents, the primary educators and protectors of their children

July 15, 2015
I've had three children go through "catholic" education. One of the great conversations amongst Catholics of my age is about the terrible job done by Catholic educators with respect to sex ed. We were taught all about contraception in Biology classes, but nothing about relational context, let alone anything about what the Church teaches on this. I often thought this might be because of a lack of commitment to this teaching from those responsible. An over-reliance on conscience was prevalent at the time and this no doubt contributed to the lack of diligence in this regard. Most of all I blame those who have oversight in the diocese for ensuring Catholic education was Catholic. Interestingly, the same man is in charge now, and, as a father who has had three sons go through the Catholic system, I'm sad to say, nothing has changed. The provision for sex ed for our kids is truly attrocious- harmful I would say.

It's not all doom and gloom however.

This excellent article appeared in L'Osservatore Romano in December, 2011 and was written by Edmund Adamus, Director, Office of Marriage and Family Life in the Diocese of Westminster. 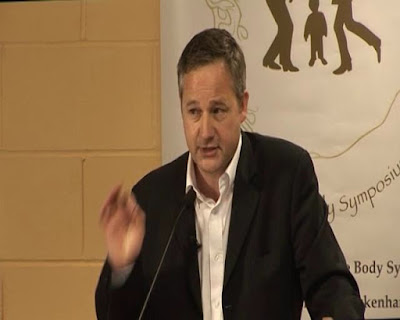 Supporting parents, the primary educators and protectors of their children.

Many parents find providing formation for their children in the area of Christian sexuality understandably challenging, but it need not be so daunting. Thanks to an ever- increasing awareness of Blessed John Paul ll's catechesis of Human Love in the Divine Plan (more popularly referred to as theology of the body) more and more ideas and resources are being designed to help young people develop authentically against what the Holy Father calls the "banalisation" of sexuality. In this Year of Faith focused as it is upon generating fresh energy towards a new evangelisation, let us not forget those whom the Church calls the "primary agents of evangelisation" — spouses and, in particular, parents. One such resource that does this most effectively is As I have Loved You, whose author is Dr Gerard O'Shea of the John Paul II Institute for Marriage and Family in Melbourne, and which has been refined in its content by parents themselves. It is an excellent example of how to translate the principles laid out in the document The Truth and Meaning of Human Sexuality into simple, practical activities that parents untrained in theology can both understand and impart to their sons and daughters in the home and at the age that, out of love for their children, they know best. The document of the Pontifical Council proposes four key principles:

If we acknowledge that each child has a right to be morally formed individually, this makes group or classroom presentations in respect of some aspects of human sexuality problematic. Conscientious Catholic teachers and educators [all too often unduly burdened with the increasingly aggressive civil demands for explicit sex education, even at primary age-levels] know just how the more intimate aspects of the topic are best handled through a personalised one-to-one dialogue.

They also know [as they are often parents themselves] that those best placed to deliver this kind of one-to-one formation, are in fact parents. For countless decades, Catholic parents have appropriated the habit of delegating their unrenounceable and irreplaceable educative role in this arena to the Catholic school, and then largely forgetting about it. Now they need to be formed as moral educators of their children. How can it be done in a climate of ethical pluralism? How will the substantial number of non-practising un- churched Catholic parents, many of them estranged from the Church's beautiful vision for marriage and family, react to the notion that they are responsible for forming their children in Catholic sexual ethics?

Dr O'Shea has put many parents and teachers and clergy in his debt, for he proceeded with an experiment that he knew had to be attempted even if it was not in a climate where it would meet with universal success. However over a period of six months, after careful consultation with teachers, parents and experts in the field, the program was completed and ready to begin. The outcome of the process was abundantly blessed for not only were committed Catholics extremely interested, but the appeal of As I Have Loved You has ended up as being much broader. Many of those who expressed hostility to the Church's teaching on sexuality actually had no idea of what it really was. Once they take time to hear about it, their attitude changes entirely.

The materials have been trialled for the past eight years, and have been used in Britain as well as in Australia, New Zealand, Canada and the USA. The beauty and humanity of this teaching has moved many, including lapsed Catholics and people with no Catholic background, as these comments illustrate:


"When you talk about sex education, you don't mean just the biology — you are talking about what it means to be a loving and giving human being. Of course parents are going to be best at doing that for their own children. We might have our failings, but at heart we do love our own children. We parents are the ones who are there all the time for them. We're the ones who have the big picture in mind for our own individual children".

"I never thought I'd be able to do this for my sons. I was never very good at school so thought it would be best to leave everything to qualified teachers. Now I realise how much my boys need me to be there for them, and I know that no one can replace me. I still think it's going to be hard, but I want to do it and now I know how to go about it"

Using easy to understand language and graphics, the book offers them advice and materials for the formation of their own children in a well-integrated sexuality. Parents can readily draw on their own efforts and insights to talk sensitively and lovingly to their children about sexual development and the responsibilities that come with this great gift from God. Clear guidelines honouring the unique needs of children provide a thoroughly practical resource that brings confidence and inspiration. It respects the absolute right and Divine duty of parents to educate their children about human sexuality supporting them without undermining their confidence or dismissing their competence. I commend it in response to the Holy Father's Exhortation that we give "maximum pastoral attention" to the area of marriage preparation and in anticipation of the forthcoming va-demecum on remote, proximate and immediate marriage preparation from the Pontifical Council for the Family. As I Have Loved You is published by Gracewing Publishing in Great Britain and Connor Court in Australia. 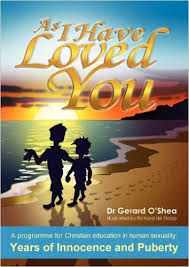 The book is avaliable on Amazon here.