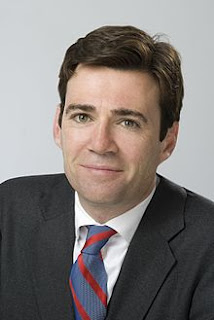 The Catholic Herald draws attention to Andy Burnham's cultural catholicism in this article.

It seems, as long as the Church doesn't have any opinions on anything, it's fine by Burnham. The Catholic Herald reports him as making the following comments:

“I find that quite difficult because if I think of the Church of my youth, and the priests that I knew, the feeling and overriding mood was quite forgiving really, quite humane, humorous, irreverent, [!!!] even the priests. [The whole point of the Church is as a vehicle for Christ's mercy; think of the parable of the Good Samaritan; the Church administers the Sacraments (pouring on oil and wine) until the master returns].

“That’s my memory of the Church that I grew up with. And it seemed at some point with the change of popes to click into a more judgmental mode and became much more obsessed with sexuality and issues related to sexual behaviour. And in that period, I drifted more and more away and Ratzinger said he wanted a ‘smaller, purer’ Church, which I found quite terrifying actually. [errr...no he didn't. Back in 1969 (Burnham was born in 1970) theologian Joseph Ratzinger made some comments about our Catholic future. They were included in his work Faith and the Future published by Ignatius Press in 2009.

"The church will become small and will have to start afresh more or less from the beginning.

She will no longer be able to inhabit many of the edifices she built in prosperity. As the number of her adherents diminishes . . . she will lose many of her social privileges. . . As a small society, [the Church] will make much bigger demands on the initiative of her individual members….

It will be hard-going for the Church, for the process of crystallization and clarification will cost her much valuable energy. It will make her poor and cause her to become the Church of the meek . . . The process will be long and wearisome as was the road from the false progressivism on the eve of the French Revolution — when a bishop might be thought smart if he made fun of dogmas and even insinuated that the existence of God was by no means certain . . . But when the trial of this sifting is past, a great power will flow from a more spiritualized and simplified Church. Men in a totally planned world will find themselves unspeakably lonely. If they have completely lost sight of God, they will feel the whole horror of their poverty. Then they will discover the little flock of believers as something wholly new. They will discover it as a hope that is meant for them, an answer for which they have always been searching in secret.

And so it seems certain to me that the Church is facing very hard times. The real crisis has scarcely begun. We will have to count on terrific upheavals. But I am equally certain about what will remain at the end: not the Church of the political cult, which is dead already, but the Church of faith. She may well no longer be the dominant social power to the extent that she was until recently; but she will enjoy a fresh blossoming and be seen as man’s home, where he will find life and hope beyond death." So the Pope Emeritus' comments were a prophetic statement about what the future Church may look like due to the apostasy and persecution being visited on it by politicians like Burnham, who speak off the top of their heads without any real depth of understanding about that which they address!]

“I did feel that those years were difficult ones but I have high hopes for the new Pope. A humble man with great warmth and a fantastic character. When the vote [in favour of same-sex marriage] happened in Ireland recently I did hope that it might be a moment for him to move the Church on. I still live in hope.” [So he clearly does not understand what the Church teaches or why. He just wants it to change to be more in line with his own opinion. Sound familiar?]

In The Huffington Post interview there are some more details.


“the barbs have wounded him, precisely because he feels he has taken a strong stand on LGBT rights, a stand that has brought him into conflict with devout Catholic friends and family.

“I’ve had people attacking my lack of commitment at times and I’m keen to say I did play a leadership role. I’m Catholic by upbringing, but I’m not particularly religious now. My kids go to a Catholic school [what a hypocrite], so I still believe in the values and the grounding it gives you, I’m a very big believer in that. [so all soundbyte, no substance in other words. This strikes me as a blatant attempt to appeal to everyone and steer away from being religious. Just what is it about convictions that politicians seem so desperate to avoid demonstrating they have any? Further proof of the fact that Blair himself once remarked that “people do think you’re a nutter” if you talk about religion in politics. So, in the main, they don’t.]

“But because of my background, when I voted it always caused a kind of tension in terms of people I know, friends, family, so I do find it fairly hurtful when people accuse me of lacking commitment.”
On the Catholic church’s approach issues like gay rights and birth control, he feels it has lost touch with millions of ordinary British Catholics.”

Once, Labour was the natural home of Catholic voters but the future looks bleak as Kevin Meaher wrote here:


Whoever wins next month’s Labour leadership election, we can be sure of one thing – the party will become an increasingly hostile place for church-going Catholics.

Any Labour government in the near future would involve characters like Tristram Hunt. You may recall the bigotry he displayed on #BBCQT earlier this year? We've also seen Yvette Cooper and the Unions writing to MPs telling them to vote against the gendercide ban. Now we face Labour MP Rob Marris' new #AssistedDying Bill. Labour is lost, and Burnham's ill informed comments here just demonstrate the shallow nature of modern politicians of all ilks. Where are the committed intellectual giants we need to build a better society? Labour is now run by people who'd sneer at the Christianity of great Labour figures such as Hardie and Lansbury. In all good conscience, what committed Catholic could now support Labour?

Whether they realise it or not, this is a potential perfect storm brewing for Labour, who, traditionally have drawn much support from Catholics. As Meaher points out in The Catholic Herald:


Polling from Ipsos MORI from 1992 onwards shows large Catholic leads for Labour compared with the Conservatives.

This peaked at a staggering 60-19 per cent advantage in 2001. Even in May, 41 per cent of Catholics voted Labour, 11 per cent higher than the population at large, according to figures from the British Religion in Numbers project at Manchester University.

Indeed, much of Labour’s meltdown in Scotland, where the party lost 40 seats in May, was down to Catholics abandoning the party in droves. Between 2010 and 2015,

Labour’s share of the Catholic vote fell from 63 per cent to just 36 per cent. Any way back for Labour in Scotland means retrieving the Catholic support that went to the SNP.

It’s a trend that is perhaps most pronounced in general political attitudes, where Catholic support for Labour shines through. As Ipsos MORI found, while fewer than a quarter (22 per cent) of the public generally describe themselves as “Old Labour”, more than a third (34 per cent) of Catholics say that term best describes their political view. On questions of distributional justice, most Catholics are reliably left-wing.

Yet on ethical and social issues, the party and its Catholic voters are often on different planets. The Labour Life Group has repeatedly asked to officially affiliate to the party, but these appeals have always been rejected. There is, of course, only one ‘‘correct’’ view on abortion.

The danger for Labour is that the more that politics becomes focused on social rights and less on economic redistribution, fewer and fewer Catholics will find they have much in common with the liberal-left.

Personally I feel like I am in the middle of a messy divorce. The social policies of the Labour Party have always felt comfortable with my faith. But Labour has turned into some sort of Social Engineering Monster. Burnham talks about the Church's obsession with sex, but Labour seems to be all about gay rights, abortion, and forcing a social programme down everyone else's throats. I am deeply worried about a future where Labour no longer exists. Ratzinger may have predicted a smaller Church, I think there could be a startling parallel with the Labour Party in this country.