Feast of the Archangels

Today is the Feast of Michael, Raphael and Gabriel, Archangels

In the new calendar today three Archangels are celebrated, while in the older, traditional calendar we focus on St. Michael. This has been the time of year to honor angels for a long time in the Roman Church. The ancient Veronese Sacramentary has an entry for “Natale Basilicae Angeli via Salaria” for 30 September. The Gelasian Sacramentary has a feast for “S. Michaelis Archangeli”. The Gregorian Sacramentary has “Dedicatio Basilionis S. Angeli Michaelis” for 29 September. 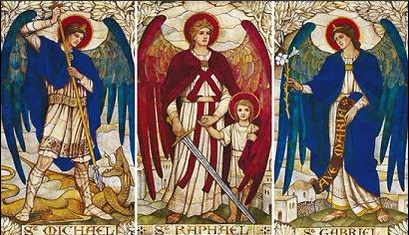 In the presence of the angels, come, let us adore the Lord.

St Michael
He is mentioned in the Apocalypse as the leader of the heavenly host. He is a patron of soldiers.
See the article in the Catholic Encyclopaedia.

St Gabriel
He appears in the book of Daniel to explain some of the prophet’s visions, and was also the bearer of the Annunciation to the Blessed Virgin Mary.
See the article in the Catholic Encyclopaedia.

St Raphael
In the Book of Tobit, he is the angel who heals Tobit of his blindness. His name meansGod heals.
See the article in the Catholic Encyclopaedia.

At that time Michael will stand up, the great prince who mounts guard over your people. There is going to be a time of great distress, unparalleled since nations first came into existence. When that time comes, your own people will be spared, all those whose names are found written in the Book.

The angel Gabriel spoke to me and said ‘Daniel, you see me; I have come down to teach you how to understand. When your pleading began, a word was uttered, and I have come to tell you what it is. You are a man specially chosen. Grasp the meaning of the word, understand the vision.’

I am Raphael, one of the seven angels who stand ever ready to enter the presence of the glory of the Lord. When I was with you, my presence was not by any decision of mine, but by the will of God; it is he whom you must bless throughout your days, he that you must praise. I am about to return to him above who sent me. Write down all that has happened.

And so it was that not merely an angel but the archangel Gabriel was sent to the Virgin Mary. It was only fitting that the highest angel should come to announce the greatest of all messages.

Some angels are given proper names to denote the service they are empowered to perform. In that holy city, where perfect knowledge flows from the vision of almighty God, those who have no names may easily be known. But personal names are assigned to some, not because they could not be known without them, but rather to denote their ministry when they came among us. Thus, Michael means “Who is like God”; Gabriel is “The Strength of God”; and Raphael is “God’s Remedy.”

Whenever some act of wondrous power must be performed, Michael is sent, so that his action and his name may make it clear that no one can do what God does by his superior power. So also our ancient foe desired in his pride to be like God, saying: I will ascend into heaven; I will exalt my throne above the stars of heaven; I will be like the Most High. He will be allowed to remain in power until the end of the world when he will be destroyed in the final punishment. Then, he will fight with the archangel Michael, as we are told by John: A battle was fought with Michael the archangel.

So too Gabriel, who is called God’s strength, was sent to Mary. He came to announce the One who appeared as a humble man to quell the cosmic powers. Thus God’s strength announced the coming of the Lord of the heavenly powers, mighty in battle.
Raphael means, as I have said, God’s remedy, for when he touched Tobit’s eyes in order to cure him, he banished the darkness of his blindness. Thus, since he is to heal, he is rightly called God’s remedy.

Glory be to the Father
and to the Son
and to the Holy Spirit:
as it was in the beginning,
is now, and will be forever. Amen 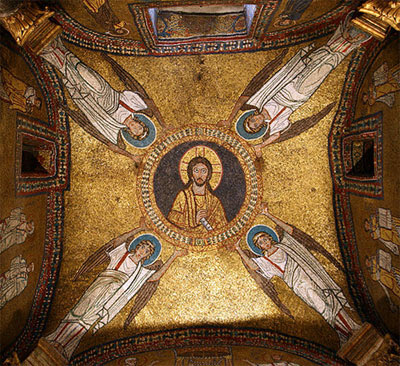