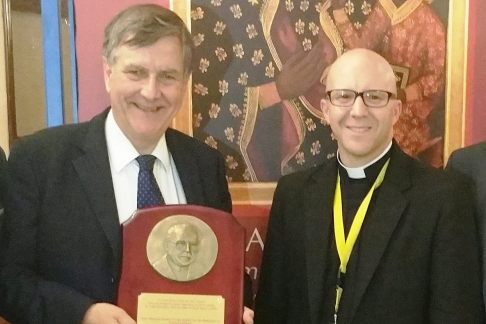 SPUC launched their new website yesterday https://www.spuc.org.uk/ it looks really good! Their Chief Executive is John Smeaton. He is a somewhat controversial figure for many, probably because he makes them feel uncomfortable—he is unflinchingly unwilling to compromise on Catholic issues and speaks the truth to power. He was recently given the inaugural Father Paul Marx Pro-Life Award by Human Life International (HLI), the world's largest pro-life organisation, at a banquet concluding HLI’s 7th Prayer Congress for Life in Fatima, Portugal.

Personally, I find him rather refreshing in his straight-forwardness and clarity. I also think he is a bit of a hero. Today saw some disasterous developments at the Synod on the Family in Rome as Thirteen cardinals have written to Pope Francis to protest about the direction being taken. The letter, which was handed to the Pope by George Cardinal Pell on Monday 5th October, is a devastating critique of the conduct of the synod.

Father Ray comments on this over on his blog, where he states:


Antonio Socci said over the weekend speaking of the Synod as a war machine, “One knows, in these times, that the German engines need to be scrapped and the Argentinian coachwork is junk mixed with Peronism and rusty liberation theology.” and “They want to apply their disastrous recipes to the whole Church, with devastating effects on a global scale.” Socci refers to the ineffectuallity of the Church in South-America and in Germany. Why has the Pope with great deliberation chosen that the Synod should be led by bishops of failing, even dying Churches? Why are the voices of fecund growing Churches almost ignored?

Meanwhile, in this interview, John Smeaton explains exactly what is at stake and where the problems are. He also spells out the real consequences (which are life and death) for the prevarication and unwillingness to speak clearly about Church teaching. John articulates the Catholic position with clarity in this interview and asks important questions. Most clearly, we will not win souls for God by changing what we teach about the truths that have been revealed to us. We will not win over our critics by watering-down what we have said. We can only look ridiculous and erode our intellectual integrity. I think this is clear and a valuable contribution that should be widely disseminated. Please do share it about.