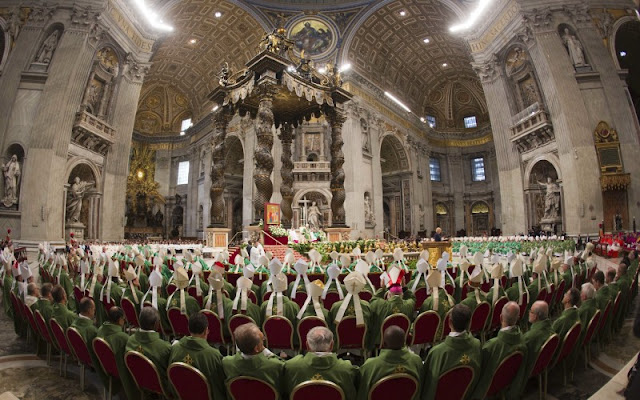 The big story this weekend was that a CDF official, in a clear attempt to subvert the synod which opened on Sunday, announced:

"My name is Krzysztof Charamsa. Monsignor Krzysztof Charamsa. I am a member of the Congregation for the Doctrine of the Faith...the second secretary of the International Theological Commission. I'm a theologian, philosopher; I lecture  in bioethics at the Pontifical Gregorian University... I am gay"

It was good to see that the Vatican, the CDF, his own Bishop (if your Polish is up to it) and Fr. Dariusz Oko, who was singled out for criticism by Mgr Charamsa, all quickly responded faithfully to Church teaching.

Fr. Lombardi, Vatican spokesman, said on Oct. 3 that Mgr Charamsa and his reflections on his life and sexuality were deserving of respect, but

“the decision to make such a pointed statement on the eve of the opening of the synod appears very serious and irresponsible, since it aims to subject the synod assembly to undue media pressure...Mgr Charamsa will certainly be unable to continue to carry out his previous work in the Congregation for the Doctrine of the Faith and the pontifical universities,” [My emphasis].

Much of the response I've read on line is dismay that a priest in such a position could be so misguided about so many important issues. Fundamentally, the sacrificial nature of real love, and the irrelevance of genital expressions of affection- this is not "love" in any sense, it is using someone else for gratification. Love must always put the good of the other before my own selfish desires.

Most worrying is the claim I am hearing that the Communion for divorced and remarried is just a Trojan Horse, the real agenda at the Synod is homosexuality.

Meanwhile, in the Pope's final US homily he criticised partisan approaches to #Synod15, one has to wonder if, given the self-revelation earlier this week of Cardinal Godfried Danneels blatant politicking and deliberate maneuvering to facilitate the removal of Pope Benedict XVI, will the Holy Father now remove the self-confessed partisan from the Synod process? Or is this proof that, in fact, only one orientation of partisan agenda is desirous of removal?

In more positive news, Bishop Olmstead of Pheonix has written an apostolic exhortation to men of which there is a good deal of chatter and approval. It encourages men to take up their responsibilities as Catholics, as members of society, and as husbands and fathers. Full text here.

"There is a paragraph about fathers as heads of their families; I do not believe I have seen any (living) diocesan bishop mention this aspect of the Church's teaching before. This is what he says;

There are those in our culture today, however, who do not want us to see fatherlessness as unnatural or lamentable. Do not be fooled by those voices wishing to erase all distinctions between mothers and fathers, ignoring the complementarity that is inherent in creation itself. Men, your presence and mission in the family is irreplaceable! Step up and lovingly, patiently take up your God-given role as protector, provider, and spiritual leader of your home. A father’s role as spiritual head of the family must never be understood or undertaken as domination over others, but only as a loving leadership and a gentle guidance for those in your care. Your fatherhood, my fatherhood, in its hidden, humble way, reflects imperfectly but surely the Fatherhood of God, the Father to those whom the Lord has given us to father."

It is well worth reading Dr. Shaw's commentary on the letter here.

More locally, the Faith in our Families blog has highlighted some clear slight of hand from our Cardinal Archbishop, Vincent Nichols. This blog is well researched and joins the dots we all know are there, but have perhaps failed to connect for ourselves.

It is hard reading stuff like this, because no one wants to think the man ultimatly in charge of the Church in England and Wales is doing anything other than leading us in following Christ, but the information she puts out there must give us cause for questioning some of what Cardinal Nichols says, at least. Especially when read in the context of information out there from many other bloggers.

I am reminded of the words of Pope Leo XIII

“The worst kind of heretic is one who, while teaching mostly true Catholic doctrine, add a word of heresy, like a drop of poison in a cup of water.”

Because Cardinal Nichols slips in his questionable positions along with recognisably Catholic teaching. This means we tend to ignore it, choosing to see the best and ignore the bad stuff. But his efforts are starting to show in practical ways.

It may seem like hyperbole, unless you know ++Vincent’s history, and bloggers have long memories.  ++Vincent was ++Derek Warlock’s protégé and his theology was formed by people like Fr. Kevin Kelly. In 1976 . Fr Vincent Nichols was appointed Assistant Director of the Upholland Northern Institute (UNI) which had Fr Kevin Kelly as its first Director. Fr Charles Curran is invited by Fr Vincent Nichols to give a series of talks at UNI in August 1981. You may recall this letter to Fr. Charles Curran from the CDF in 1986, removing his teaching faculties due to his consistent dissent from the teachings of the Church on many moral issues - especially the indissolubility of marriage.

The key event is in May 1980 when the infamous National Pastoral Congress (NPC) takes place in Liverpool - swiftly followed by the report "The Easter People" (August 1980). The NPC petitioned for women priests, artificial contraception and Holy Communion for divorced and remarried Catholics. Worlock had been thwarted in his ambition to become Archbishop of Westminster, but his ambitions still spread beyond the confines of Liverpool. So the NPC was his brain child which he intended to spread his version of Vatican II throughout England and Wales. Ultimately the recommendations of the NPC on contraception and divorce and remarriage were rejected by Pope St. John Paul II, Archbishop Worlock continued to push his own agenda, with Fr. Kevin Kelly, Fr. Timothy Buckley, Fr. Charles Curran and UNI as his agents.

One survey response Clare highlights looks hugely suspicious to me:


“…To the younger generation the Catholic Church is a medieval irrelevance. While I, myself, believe in Jesus – I am appalled at what the institution He founded has become. A tyrannical power structure, stuck in a medieval culture and unable to bring itself into the modern world. One good example of this is the so called New Translation of the Mass. A backward step from language that ordinary people understood to a ridiculous artificial so-called sacral language which is no more than a mixture of garbled English, medieval theological vocabulary and transliteration from Latin…”

This comment is so typical of ACTA, I can almost guess who wrote it. One wonders why on earth it was felt important to include this, as Clare herself comments:


What has bashing the new translation of the Mass got to do with a questionnaire on Marriage and Family?!

Given that Archbishop Nichols has failed to condemn ACTA, even after Bishop Campbell did (and in no uncertain terms), coupled by multiple, questionable comments by Archbishop Nichols, and his endorsement of "gay Masses" at Farm Street, I have little doubt that this is the agenda being forwarded by the Cardinal Archbishop today is just the same as it was in the seventies and eighties.