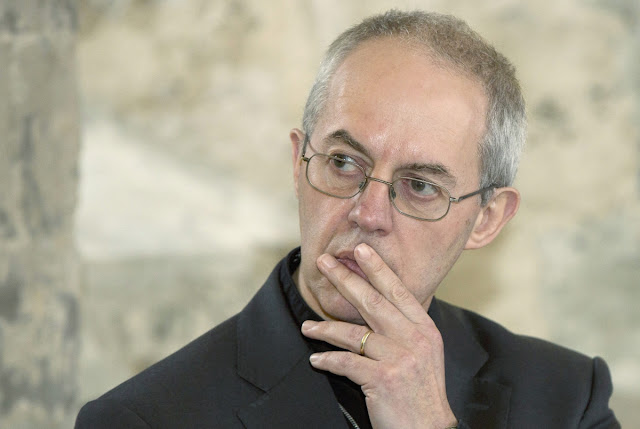 I was shocked and more than a bit disappointed to hear about Justin Welby's admission to BBC's Songs of Praise that the Paris attacks made him doubt the presence of God (see here), whatever that means.

I must be naive to think that 'belief in God' might be a bare minimum for anyone thinking of applying for the job of leader of the C of E?

This sort of reaction presses all the wrong buttons for me. I don't think it is a good thing for a religious leader to express that he has doubts, even in a misguided attempt to show solidarity with an increasingly secular population. Asking "where was God in all this" is one of the oldest questions in theology and the answer is always "with the people who are suffering".

If he has doubts, how can he lead others away from doubt? Surely the job he is in is to encourage and give confidence, confidence built on his personal relationship with God in prayer, his intellectual understanding of the reality of human beings seeking understanding of their existence and the teaching and traditions of the organisation he leads?

His expression of doubt is a bit like the CEO of Twix expressing doubt about whether chocolate bars really exist!

This isn't the only awful comment he makes in this interview however. He goes on to make reference to the Bible as a source of authority. Although we might expect him to do this in his role, I find reference to the Bible in the context of world-politics incongruous. Especially if such reference is deployed as a means of arguing for a particular political approach. The Bible seems to be problematic for the Pope at the moment, so I'm not sure how authoritative those of no faith are going to find it?

I am a Catholic and I do trust what God has revealed to us in the books of the Bible, but if you do not believe the Bible is anything more than an collection of ancient texts, how does referencing it appeal to any greater authority?

Then he makes the fatal error regarding religion and conflict in accepting that the Paris Attacks were part of a religious war. The Islamic offensive is a geo-politically driven retaliation for the decades of bombing western states have perpetrated on the Middle East. Looking for someone to blame for their hurt and misery, they look to the decadent West. They see our lack of morals, our debauchery, our hypocrisy and they see how we are no longer driven by ideology, but chase money (idolatry). They sense we are weak and so exploit those weaknesses. Combatants tend to express their hope in a religious reward for expending their lives in conflict because they have to believe their sacrifice won't be wasted.

Given that the Church of England is "bewildered" by a ban on a cinema ad featuring the Lord's Prayer, and looking for people to back them over this, isn't Welby's "confusion" rather bewildering for his flock?