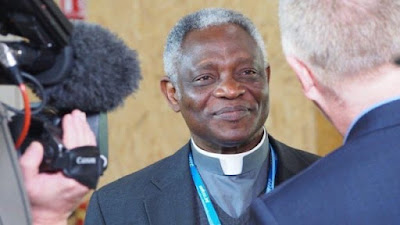 Earlier this week it appeared Cardinal Turkson had gone "full Anglican" when he was reported by the BBC as having said that birth control could "offer a solution" to the impacts of climate change see here.


In a wide-ranging interview with the BBC, Cardinal Turkson suggested that birth control could help alleviate some of the impacts of climate change, particularly the lack of food in a warmer world.

"This has been talked about, and the Holy Father on his trip back from the Philippines also invited people to some form of birth control, because the church has never been against birth control and people spacing out births and all of that. So yes, it can offer a solution," he said.

This immediately seemed to me to be a comment which was only referring to Natural Family Planning, which was then taken and spun out of all context by the BBC, because, of course, the Church changing its position on artificial birth control is one of its pet positions.

However, these comments obviously caused great distress and confusion for many Catholics, as detailed by Voice of the Family here.

Thankfully, Cardinal Turkson has now clarified his comments as follows:

“The Ghanian cardinal recognized that, to the mind of the English-speaking world, “birth control” generally means some form of artificial contraception, and he therefore acknowledged the need to be more careful with his words.

“But in responding to a question that contained the expression ‘birth control,’ my intention was to present the Church as not inimical or opposed to the idea of spacing births,” he said. “The issue the Church has always had with this is method, how you do it? But the pope used the unfortunate expression of ‘breeding like rabbits.’” [Interesting that he should state so directly “the pope used the unfortunate expression…]
Cardinal Turkson continued: “When I used the phrase ‘birth control,’ what I had in mind was the Church’s own traditional teaching about responsible parenthood. So wherever anyone reads ‘birth control’ in the BBC interview, they should understand it as meaning ‘responsible parenthood.’”He said what the Holy Father had advised on his trip back from Manila, after visiting slums with many children who were uncared for, was that “responsible parenthood would be useful” for people there.

“In the BBC interview, the reference to ‘birth control’ is actually a way of formulating the Church’s traditional teaching on responsible parenthood,” he reiterated.”

For more on the Church's teaching about fertility, see here.

Whether or not he intended to mean birth control in the context of NFP his statements were still problematic, i.e., the cardinal suggested that limiting births can “offer a solution” to difficulties such as water and food shortages that are said to come from overpopulation and climate change. Using NFP for this purpose would not seem to meet the requirements necessary for its use.

Voice of the Family said regarding the response:


Unfortunately Cardinal Turkson’s clarification leaves unanswered the question as to whether he believes, as indicated in his comments to the BBC, that the world is facing a population problem that is leading to “lack of food.”

“Having more mouths to feed is a challenge for us to be productive also, which is one of the key issues being treated over here, the cultivation and production of food, and its distribution.
“So yes it engages us in food security management, so we ensure that everybody is fed and all of that. The amount of population that is critical for the realisation of this is still something we need to discover, yet the Holy Father has also called for a certain amount of control of birth.”

Such comments are highly irresponsible as they give credence to the proponents of overpopulation and to the aggressive attempts of governments and international aid agencies to reduce birth rates through abortion and contraception.