A Father And His Son by Pierre-Marie Dumont 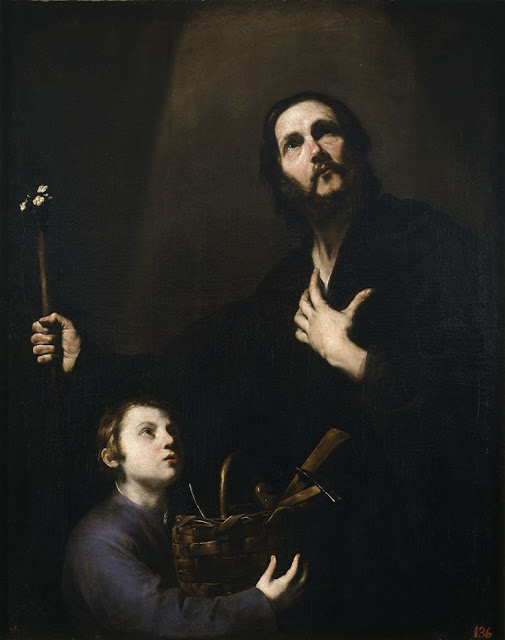 Today is the Solemnity of St. Joseph. I thought this was a beautiful reflection from Magnificat:

Joseph de Ribera accompanies us here in the contemplation of that great mystery of human fatherhood which, through Joseph, its patron saint, reveals the divine Fatherhood. A young man, noble and handsome, Joseph firmly grasps a staff of almond wood which, according to the apocryphal gospels, flowered on the day he was chosen by the Immaculate Heart of Mary. As with the staffs of Moses and Aaron, this staff also recalls the divine authority conferred on Joseph and his ministry. It stands as well for the shepherd’s staff, marking Joseph as a descendant of the shepherd David and indicating that this holy man is charged with protecting and guiding the Lamb of God to human maturity. Jesus carries a basket of carpenter’s tools.

From childhood, he diligently worked by his father’s side, most often at the huge construction site of the new town of Sepphoris, some four miles from Nazareth. Perched on a housebeam, he would daily share with Joseph the pack lunch prepared for them by Mary. He learned everything from him, how to become a carpenter, how to become a man. Is it not so that “a son cannot do anything on his own, but only what he sees his father doing?” Later when, speaking of God, Jesus would say, “My Father is at work…so I am at work”; he could not contain his emotion. For he had experienced the human depth of just such a community of love and work between a father and his son. Yet when, at the age of twelve, Jesus gets “lost” in the Temple, and his mother reproaches him, “Your father and I have sought you anxiously,” he replies, “Did you not know that I must be about my Father’s business?”

This is why when the child Jesus raises his eyes toward his father, his father does not return his gaze: he accompanies it and raises it up to his heavenly Father. And it is also to God, his Father, that Jesus raises his carpenter’s tools in offering. Is it not true that Jesus was to offer his life for the salvation of the world on a carpenter’s handiwork? That he was to be fixed there with hammer and nails, the tools of a carpenter? It is not true that the cross that saves us is, in large part, built by Joseph the carpenter?

“He was chosen by the eternal Father as the trustworthy guardian and protector of his greatest treasures, namely, his divine Son and Mary, Joseph’s wife. He carried out this vocation with complete fidelity until at last God called him, saying: ‘Good and faithful servant, enter into the joy of your Lord’” (St. Bernardine of Siena).
José de Ribera Magnificat Saint Joseph and the Infant Jesus St. Joseph