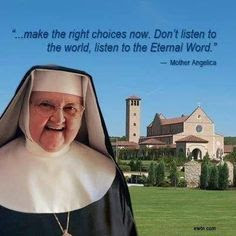 Mother Angelica, by her courage in starting EWTN from a shed, has, almost single-handed at first, done more to bring authentic Catholicism into people's homes than anyone l can think of. May God rest her good soul.

She has effected so many people. She has certainly had an effect on me and EWTN has provided a valuable source of information and a way of being connected to the Catholic world at large.

She was a fierce defender of the Church and had the courage that so many lack today: courage to stand up and tell it like it is, to shame the hypocrites and the relativists who are strangling our Church and killing the faith.

This is her legendary rant against the liberal Church in America:


Mother Angelica, 1993 (abridged transcript):
~ You know, as Catholics we've been terribly quiet all these years…
I'm tired of enneagrams. I'm tired of your witchcraft. I'm tired. I'm tired of being pushed in corners. I'm tired of your inclusive language that refuses to admit that the Son of God is a Man. I'm tired of your tricks. I'm tired of your deceits. I'm tired of you constantly just making a crack and the first thing you know there's a hole and all of us fall into it. No. This was deliberate. This was a group that was told what to do and how to do it.
I am so tired of you liberal Church in America. And everything you've ever done has gone in silence. Nothing, nothing you've done from your withcraft to your anagrams to your centering prayer to all this earth spirituality…No, this is not an accident. We've swallowed this now for thirty years. I'm tired of it. We've swallowed enough of your idea of God and you really have no God.
You spread your errors to children. And our children don't even know the Eucharist anymore. They don't understand that it is the Blessed Sacrament. That it's the Body and Blood, Soul and Divinity of Jesus. Your Catechisms are so watered down that they say nothing but 'love your neighbor'. No, you've got to love God first…I don't like your Church. You have nothing to offer. You do nothing but destroy.
We're not going to go for all those crazy things that you're pushing out as new and cultural and American….You've made it pagan. You've helped to make this nation pagan because you have no spirituality that attracts…Your whole purpose is to destroy.
You're not builders you're destroyers. I'm not going to take that anymore.
You've been strong too long.
What a destructive force you have been. No. No.
I have to make a statement as you make a statement, but mine is not as subtle. Mine is well thought out and I am not going to listen to what you have to say.
My community and I proclaim to you and to this nation: we are Roman Catholic of a Latin Rite…we're not conservatives, we're merely Catholic.
We have hidden under bushels too long. We have taken everything and we have been obedient. To what? To a destructive force.
Don't call me rebellious. No. You're rebellious.
Well, I've made my statement. I don't care whether you like it or not. It's time somebody said something about all these tiny little cracks that you have been putting for the past thirty years into the Church….Am I bitter? No, but I'm being realistic.
How sad you are. But we know what you think and what you want…You've hidden your agenda with a mime. My agenda is not hidden. I tell you and the whole world.
I'm tired of your theologians who do nothing but divide and separate and destroy. It's time. It's time we say that.
I don't like your kind of religion. I don't like your ways.
Now you know how I feel. I've known for years how you feel but I have yet to hear anyone contradict you or cross you or say anything to distress you. Well, I'm saying it. I'm saying it.
'Oh, Angelica, you're getting rather violent?' No. We're just tired of you constantly pushing anti-God, anti-Catholic and pagan ways into the Catholic Church.
In spite of what I've said, I love you and I feel sorry, very sorry, that it has to be like this, but it has to be ~

In the above transcript, key phrases stand out, including: "This was deliberate", "No, this is not an accident", "You've hidden your agenda". Mother Angelica's words reveal that she knows that there is indeed a group within the Catholic Church which has an agenda of changing the Catholic Faith and that this group has been most active post-Vatican II.

Father Stewart Foster, a priest of my Diocese of Brentwood, has appeared on EWTN. He posted this tribute to Mother on Social media:

Mother Angelica (1923-2016) who died on Easter Sunday. May she rest in peace. I will offer Mass for her good soul. In 1981, from a garage in Alabama, she started what is today the world's most important and influential Catholic media organisation, EWTN (Eternal World Television Network). I have had the privilege of appearing on EWTN and being interviewed on its radio network, in England and Ireland. Mother Angelica, almost single-handed at first, and with a great deal of cynical opposition from the then 'mainstream' Church in the USA (EWTN was once dubbed as 'Elderly Woman Talking Nonsense'!), nevertheless stuck to her guns, a true Mulier Fortis, in fact Fortissima. On one occasion the late Monsignor Alfred Gilbey made a trip (his only one) to America to meet Mother Angelica and appear on EWTN: aristocratic Edwardian England met Italian-America in the Deep South! It was a great success. If one thinks of the very many wonderful broadcasters who have worked on this network over the years, e.g. the incomparable Raymond Arroyo, the late Father Benedict Groeschel , Father Mitch Pacwa, and these are just a few among many, then one can begin to see how formative EWTN has been, and continues to be, in the development of the faith of ordinary Catholics, especially those in countries like the United Kingdom where religious broadcasting on the mainstream channels is almost non-existent nowadays or where it is largely the preserve of pentecostalists, evangelicals and other Protestant sects. EWTN offers daily Mass celebrated in a reverent way by a community of Franciscan Friars dedicated to the EWTN ministry, and so many elderly and housebound people l know rely on this now that they can no longer attend Mass in their own churches. Likewise, the Divine Mercy Hour is a lifeline of prayer to so many. Mother Angelica's own programmes, in the days she was able to make them before Anno Domini took their toll, are full of hard-hitting but humorous quips against liberal Catholicism, beautiful meditations on Scripture and the Eucharist... What America has given the whole Catholic world and beyond now enjoys. Lux aeterna...