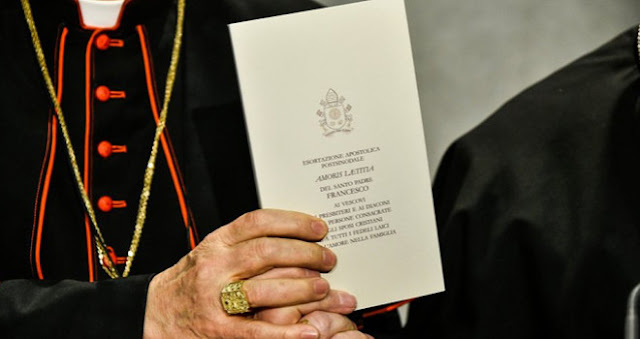 Joe Shaw, the LMS Chairman has a great post on Amoris Laetitia here.

In it he lucidly draws the battle lines that have seemingly appeared between those who are saying the exhortation is "groundbreaking" and changes doctrine, and those who are decrying it as a complete disaster because the first lot are telling us that the Communion for the divorced and remarried is now allowed.

To these battle formations, he adds a third combatant, amid whose ranks he himself stands, along with Cardinal Raymond Burke the British Confraternity of Catholic Clergy and the canonist Edward Peters.

This third group are all arguing that, if you look carefully at the document, and in particular at the key passages that those who want change are appealing to, it turns out that it makes no attempt to establish new teaching, or even make formal changes to discipline, for example by changing Canon Law.

I have been watching with some dismay as those who are concerned with fealty to the Holy See condemn the cowardice of those who are trying to read this with Catholic eyes and are being excoriated for their trouble. The problem with this approach is that it becomes a somewhat self-fulfilling prophecy if you consider that the Exhortation is a 'disaster' because the dialectic of change dynamic is the natural reading.

Joe argues that accepting this is acting as if we have been ordered by the Pope to act against our consciences and the tradition of the Church. The question he asks is: is it more helpful to priests in this situation to agree with the liberals that, 'practically speaking', or 'on a natural reading', they have been ordered to do this?


No, it is not helpful, and not for reasons of presentation or politics, but because these priests' subjective moral situation is not changed by any such 'practically speaking', 'natural reading' of the document. On many matters, though not this one, it would be changed by a properly formulated papal command, or a change in Canon Law, but that is not what we have here.

I think this is a very important point and urge you to read the full post here.

How do all these people know?? I don't know, and I studied Catholic theology for five years, in addition to living as Catholic a life as I can. I feel dismayed at all the aggressive posturing and dogmatic dictation, from all sides.

As I said in this recent post, I do not believe it is possible that God wants us to discern some secret truth that only a few can figure out. However I will not deny that the Exhortation has brought me a great deal of sadness, hurt and confusion, because it seems to be pushing in the direction I feared all along. A direction that I feared Pope Francis was pushing from the outset of his papacy; a direction which made little sense in terms of the hermeneutic of continuity and instead sought to ignore the truths and logical process of theology and "be spontaneous". Pope Francis has consistently attacked clergy, the curia, legalists and theologians, constantly condemning those who look to the rules. I have found all these condemnations very painful because my view of the Church is that it holds the truth as deposited by Christ, and I can know it. My understanding of the Law is that Christ is the embodiment of the Law; the living Torah; the fulfillment and perfection of the Law. All these truths I have learned and they have resonated with me, they made sense. And here is a Pope who keeps saying things that jar. That contradict my understanding. That seem to be aimed at attacking the Church and her beliefs. It has left me mightily challenged. As one senior clergyman said to me with regard to Amoris Laetitia and with a clearly heavy heart, just this Sunday "it's not what we want really, is it?"

No, it's not. It's not helpful at all frankly. This whole papacy has been about explaining what he really meant and trying to figure out what he was really saying, ignoring the confusing double speak and contradictions. Worrying about the moves to concilliarism and the movement of theologians in favour of sociologists and psychologists in the curia, the criticism of big families, or whatever the latest blunder is. And what have we been given? What food for the faithful? Scant little food as far as I can make out, and scant little encouragement.

But it is not what I "want" that matters. It is not my Church. It is Christ's Church, and He is in charge. What I want or what I think is irrelevant. And so on Sunday night I knelt in front of the blessed Sacrament and offered it all up to Him; all my upset and confusion, all my frustration and my fear, and I asked Him to show me what he wanted me to do with it all.

I'll let you know if I get any blinding inspiration.

For now- keep the faith.