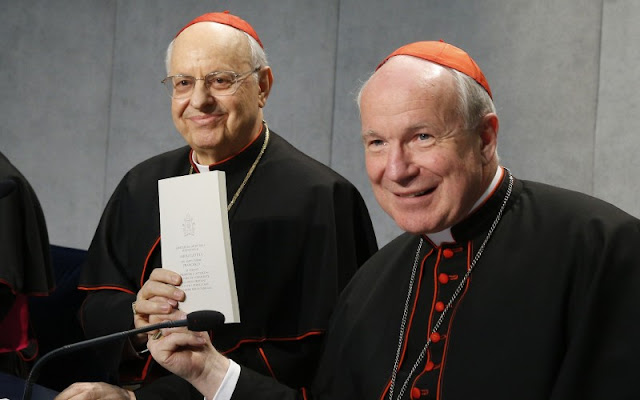 At the press conference to mark the publication of Amoris Laetitia, Cardinal Schönborn was asked twice whether the Pope intended to break with John Paul’s Familiaris Consortio. That document said that remarried people should not be allowed access to communion unless they live “in complete continence”.

The key passage comes in paragraph 84 of the document. A journalist asked: “Has anything in the entirety of those paragraphs changed? Does everything still stand as is?”

“I don’t see why there should be a change,” said Cardinal Schönborn.

So there we have it. A long-winded fudge – as we expected. But a fudge does not change solemnly defined doctrine.

We have a very long-winded document that will be read by very few people.

So after all the sound and fury – nothing has changed. People who wish to ignore the authentic teaching of the Church will continue to do so.

Paul VI repeated the Church’s doctrine. And he too asked pastors to be gentle with people. If someone comes to a priest in confession he hears their confession and gives them advice, a penance and then (after they have said the Act of Contrition) gives them absolution. He presumes that they are acting in good faith. Obviously the priest does not know who the penitent is unless he/she chooses to reveal their identity.

And of course there are three conditions necessary for Mortal Sin: grave matter, full knowledge and freedom of action.

I repeat - nothing has changed.

But no one can now deny that Pope Francis has allowed a “free and frank” debate.

And no one can claim that Pope Francis was biased towards the traditional teaching of the Church – and rigged the Synod.

Perhaps that is why Almighty God has allowed this time of testing for the Church.

The teaching of the Church has been examined – and every wheeze, every loophole, every “cunning plan” devised by Cardinal Kasper and his pals has been kicked into touch.

Obviously the BBC will apply a spin to the Exhortation. They always have – and they always will.
But in a few years time, please God, we will have a new Pope who has more clarity of thought and is less long-winded. It strikes me as hugeely ironic in some ways given the recent admonishment from Pope Francis that God is mercy, not complicated theology.

This was the last throw of the ACTA crowd and the “Spirit of Vatican II” brigade – before they (hopefully) “go to Paradise by way of Kensal Green”.

And it is now over.