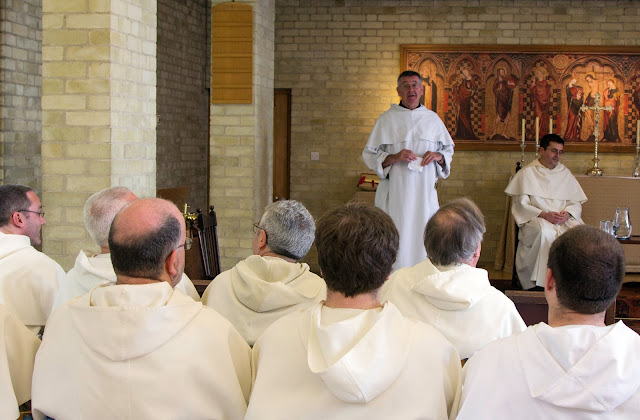 The Chapter of the Province of Dominicans in England have elected Fr Martin Ganeri OP (shown seated on the right) as Prior Provincial. He succeeds Fr John Farrell OP (standing on left in this photo). This photo was taken in the summer of 2013 at a Province day in Cambridge, where Fr Martin had been Prior (photo from Fr Lawrence Lew OP). Please continue to pray for Fr Martin, his new Council and the Chapter.

Fr Martin has taught at Heythrop and has an interesting list of publications (see here) which include a specialism in Hinduism. He studied Classics and Oriental Studies and took an MPhil in Indian Archaeology at Cambridge, and his DPhil - The Vedantic Cosmology of Ramanuja & its Western Parallels - at Oxford.

As well as Heythrop, Fr Martin lectures in World Religions at Blackfriars, focusing on Catholic approaches to other religions. In addition, he is Director of the Centre for Christianity and Interreligious Dialogue at Heythrop.