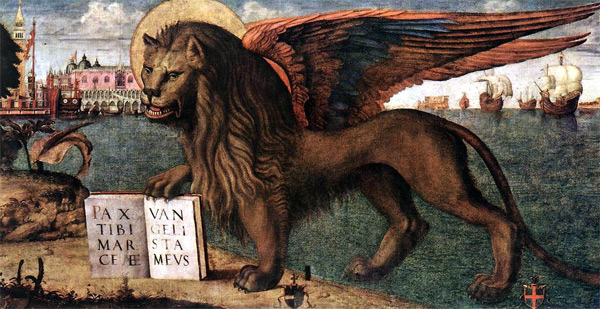 Today is my patronal feast day. Saint Mark the Evangelist, cousin of Barnabus (Collosians 4:10) and whom St. Peter calls his son (1 Peter 5:13).

When, on the occasion of the famine of A.D. 45-46, Barnabas and Saul had completed their ministration in Jerusalem, they took Mark with them on their return to Antioch (Acts 12:25). Not long after, when they started on St. Paul's first Apostolic journey, they had Mark with them as some sort of assistant (hupereten, Acts 13:5). The context of Acts 13:5, suggests that he helped even in preaching the Word. When Paul and Barnabas resolved to push on from Perga into central Asia Minor, Mark, departed from them, if indeed he had not already done so at Paphos, and returned to Jerusalem (Acts 13:13).

Papias (Eusebius, Church History III.39) asserts not later than A.D. 130, on the authority of an "elder", that Mark had been the interpreter (hermeneutes) of Peter, and wrote down accurately, though not in order, the teaching of Peter. All early tradition connects the Second Gospel with two names, those of St. Mark and St. Peter, Mark being held to have written what Peter had preached.

Saint Irenæus says: "Mark, the disciple and interpreter of Peter, himself also handed down to us in writing what was preached by Peter" (Against Heresies III.1 and III.10.6). St. Clement of Alexandria, relying on the authority of "the elder presbyters", tells us that, when Peter had publicly preached in Rome, many of those who heard him exhorted Mark, as one who had long followed Peter and remembered what he had said, to write it down, and that Mark "composed the Gospel and gave it to those who had asked for it" (Eusebius, Church History VI.14). Origen says (ibid., VI, xxv) that Mark wrote as Peter directed him (os Petros huphegesato auto), and Eusebius himself reports the tradition that Peter approved or authorised Mark's work (Church History II.15).

To these early Eastern witnesses may be added, from the West, the author of the Muratorian Fragment, which in its first line almost certainly refers to Mark's presence at Peter's discourses and his composition of the Gospel accordingly (Quibus tamen interfuit et ita posuit); Tertullian, who states: "The Gospel which Mark published (edidit is affirmed to be Peter's, whose interpreter Mark was" ("Contra Marc.", IV, v); St. Jerome, who in one place says that Mark wrote a short Gospel at the request of the brethren at Rome, and that Peter authorised it to be read in the Churches ("De Vir. Ill.", viii), and in another that Mark's Gospel was composed, Peter narrating and Mark writing (Petro narrante et illo scribente--"Ad Hedib.", ep. cxx).

The date at which Mark came to Alexandria is uncertain. The Chronicle of Eusebius assigns it to the first years of Claudius (A.D. 41-4), and later on states that St. Mark's first successor, Anianus, succeeded to the See of Alexandria in the eighth year of Nero (61-2). This would make Mark Bishop of Alexandria for a period of about twenty years.


In the preface to his Gospel in manuscripts of the Vulgate, Mark is represented as having been a Jewish priest: "Mark the Evangelist, who exercised the priestly office in Israel, a Levite by race".

St. Mark is usually symbolised by a lion – a figure of courage and monarchy. Some Christian legends refer to Saint Mark as "Saint Mark The Lionhearted". These legends say that he was thrown to the Lions and the animals refused to attack or eat him. Instead the Lions slept at his feet while he petted them. When the Romans saw this, they released him, impressed by this sight.

His attributes are the Lion in the desert; he can be depicted as a bishop on a throne decorated with lions; as a man helping Venetian sailors.

St. Mark is often depicted holding a book with "pax tibi Marce" written on it or holding a palm and book. The lion might also be associated with Jesus' Resurrection because lions were believed to sleep with open eyes, thus a comparison with Christ in his tomb, and Christ as king. Saint Mark, pray for us!
Saint Mark