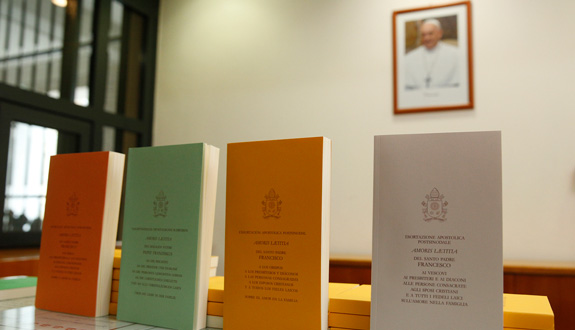 THIS is an excellent report from Carl E Olson in the Catholic World Report. In it he states:

"Exactly right. For whatever reason, Francis seems to think that the past few decades have been marked by a dogmatic rigidity that is as merciless as it is obsessed with the fine details of law, causing countless innocent or near innocent Catholics to flee a Church that they perceive to be cold and heartless. That perspective is, to put it nicely, dubious and problematic. The impression often given, unfortunately, is that any emphasis on objective moral standards regarding actions and relationships is bound to quickly degenerate into a harsh and uncharitable condemnation.

It doesn't help matters that Francis apparently plays a bit fast and loose with some of his arguments and sources."

Meanwhile, Damian Thompson identifies all the most salient points about this debacle in THIS article in The Spectator. He concludes:


In the end, the chief effect of Amoris Laetitia is to ensure that waters Pope Francis deliberately and foolishly muddied will stay muddy. Since he first raised the subject, divorced-and-remarried Catholics haven’t known where they stand vis-à-vis Communion. Now we know that Francis isn’t going to enlighten them. He has been forced to abort his revolution, if that’s what he was planning.

In the process, he has achieved his aim of making the papacy less intimidating, though not in the way he intended. This week he looks less like a supreme pontiff and more like a prime minister who has failed to get a bill through parliament.

This is precisely correct. The effect this in-fighting and confusion will have is to make the Catholic Church look ridiculous and unsure of what it thinks and believes...Let alone what it teaches. Those who who are saying there's no problem with #AmorisLaetitia must see that the fact everyone has to say that there is no problem means precisely that there is a problem! The strategically ambiguous language used coupled with the consistent reports of Pope Francis acting in a way that seemed to support the Kasper proposal over the last couple of years confirms what the Pontiff intended, but was ultimately unable to deliver, to the confusion and pain of so many who care about the Catholic Church.