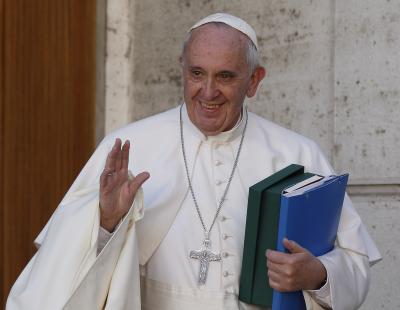 Pope Francis’s highly-anticipated post-synodal Apostolic Exhortation, “Amoris Laetitia” (The Joy of Love) on love in the family will be released on Friday, 8 April. The Vatican said the Exhortation will be presented to journalists at the Holy See’s Press Office on Friday, 8 April at 11.30.

Whilst I think it is fairly pointless to speculate on the contents of the document at this stage, there is a lot of interesting Catholic news at the moment. I thought I would gather some of the elements which have most interested me over the last couple of days and present them to you here, dear reader.

The text of the Apostolic Exhortation in Italian, French, English, German, Spanish, and Portuguese (in paper and/or digital format) will be available to accredited journalists from 8.00 a.m. (Rome time) on Friday 8th April. However, the document will remain under embargo until 12 noon that day.

The panel of speakers at the press conference will include: Cardinal Lorenzo Baldisseri, general secretary of the Synod of Bishops; Cardinal Christoph Schönborn, O.P., archbishop of Vienna, and an Italian married couple: Professor Francesco Miano, lecturer in moral philosophy at Rome’s University of Tor Vergata, and his wife, Professor Giuseppina De Simone in Miano, lecturer in philosophy at the Theological Faculty of Southern Italy in Naples.

A simultaneous translation service will be available in Italian, English and Spanish. The Press Conference can be seen via live streaming (audio-video) on the site: http://player.rv.va (Vatican Player, Vatican Radio) where it will subsequently remain available on demand.

Over at Crux, John Allen considers why the Pope has chosen Cardinal Schönborn and Cardinal Baldesseri (who caused some not inconsiderable controversy during the synod process) to present the text and suggests that this fact possibly hints that Pope Francis will side with progressives on some contentious matters regarding family life.

Although the Vatican did not release details about the document’s contents on Thursday, in broad strokes it’s expected to echo areas of wide agreement among the bishops during those summits, such as the need for more thorough programs of marriage preparation and the importance of supporting families trying to live the Church’s vision of married life.

However, the synods also exposed clear divisions among the bishops on three key issues:
During the two synods, Schönborn was seen as a leading exponent of the moderate-to-progressive position on those issues.

The National Catholic Reporter, a publication dubiously Catholic in outlook, notes that Cardinal Schönborn said “there is no mercy without truth” at the World Apostolic Congress on Mercy in Rome yesterday.

"There is no mercy without truth," said the Cardinal. "I would say that truth is the landing ground of mercy. If we do not give truth to our situations, God cannot offer us mercy."

Meanwhile, one of my favourite journalists, Edward Pentin, explores the long term repurcussions of another important dimension of this papacy: the Pope’s Curial, Synodal and Cardinalate Appointments. These are the most important markers of the direction of this Pontificate, and they mark some important changes. after two consistories, Pope Francis has purposely chosen not to award so many red hats to traditional cardinalatial sees, especially in Italy. Instead, the Holy Father has gone to the global peripheries for new cardinals, usually choosing bishops from developing countries — a move Vatican spokesman Father Federico Lombardi has described as reflecting the “universality” of the Church.

Perhaps most concerning and less well reported than the dismissal of Cardinal Burke and Cardinal Mauro Piacenza as prefect of the Congregation for Clergy, are changes in the lower ranks, where much of the legwork is carried out and where, according to some, much of the real influence lies. The Congregations for Divine Worship and Clergy have seen significant changes. A dozen officials have been replaced in the former and 10 in the latter. It’s not unusual for popes to put their favored officials in Curial positions, but Vatican sources stress that the majority removed were known for their orthodoxy and sound doctrine.

Many of the replacements are not experts in theology or canon law, but in such disciplines as sociology or psychology. One official told the Register this is aimed at making the Curia more “human,” but the newcomers’ way of looking at the life of faith “is more natural rather than supernatural.”

A further criticism has been the decision to keep certain questionable officials in place, such as Msgr. Battista Ricca, whom Francis appointed as prelate of the Vatican Bank in 2013 and who continues to run the Domus Santa Martha guesthouse where the Pope lives. Msgr. Ricca is alleged to have had a series of homosexual affairs during his career as a Vatican diplomat.

At the recent synod, too, the Pope’s personal choices of 45 participants caused concern, most notably the inclusion of Cardinal Godfried Danneels, the archbishop emeritus of Brussels, who is accused of covering up an abuse case and who last year admitted to being part of a secretive group opposed to Benedict XVI.

Robert Royal, president of the Faith and Reason Institute in Washington. “Those who like the direction his pontificate has taken naturally look forward to those appointments. Those who believe he’s confused matters and may be inviting heterodox developments feel some nervousness at the prospects.”

Royal noted that, in the United States, for example, the appointment of Archbishop Blase Cupich to Chicago and his subsequent actions “have drawn no little attention” from both camps. “And yet there have also been appointments such as Father Robert Barron as auxiliary in Los Angeles that suggest the Pope’s influence on the Curia and episcopacy may be more complex and varied than some hope or others fear,” he said.

Professor John Rist, who holds the chair in philosophy at the Catholic University of America in Washington, D.C, believes a bishop “should be orthodox,” as the Church, especially in the West, is in need of doctrine and theological substance. Any ordinary should have “a serious knowledge of theology and Church history and be willing to speak out with what the ancients used to call the ‘parrhesia’ [candid speech] of a Christian man, even before God, and unwilling to pander to populist anti-intellectualism,” he said. Pope Benedict XVI, he added, often said “‘We should think within the Tradition,’ but how can this be done if people — especially bishops — do not know what the Tradition is?”

What the Church needs most are “holy bishops, bishops of prayer and fidelity to the teaching of Christ,” said Cardinal Sarah. They should not be “compromising the Gospel,” but “teaching what Christ said in the Gospel, what the Church has taught from the beginning.”

Bishops, he told the Register, “must teach, not only by talking, but through their lives,” and not be “good at social work,” but live close to Jesus, “like Mother Teresa and St. John Paul II.”

There really is no point worrying about this, it will be what it will be and let's remember that it is undoubtedly going to focus on the areas of wide agreement. I can't help but think that if only there was as much attention and fuss made of Sacramentum Caritatis, for example, the post synodal Apostolic Exhortation of Pope Benedict XVI on the Eucharist, we would all be in a better place!