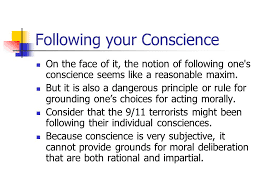 When the Second Vatican Council uses the word “Conscience” it means an “Informed Conscience” - i.e. one that has been formed in accordance with the teachings of Christ and His Church.

“Conscience” for a Catholic is not subjective and is not merely the desire of an individual to follow his/her own inclinations—which may indeed be disordered or sinful.

Gaudium et Spes refers to conscience as being guided by “the objective standards of moral conduct” and “a law inscribed in the heart by God” (GS 16).

Moreover Vatican II also states that although “it often happens that conscience goes astray through ignorance which it is unable to avoid, without thereby losing its dignity.

This CANNOT be said of the man (or woman) who takes little trouble to find out what is true and good, OR when conscience is by degrees almost blinded through THE HABIT OF COMMITTING SIN.” (GS 16).

It is therefore not very surprising that a number of the people who have signed this Open Letter have in the past publically stated that they openly reject other aspects of Christian Morality and have indeed boasted of committing acts that are considered by the Church to be intrinsically evil.
Conscience gaudiem et spes informed conscience