Freedom to speak but not to misrepresent 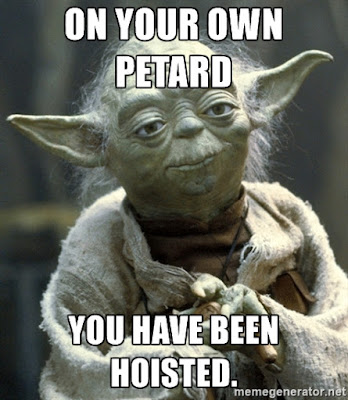 After some careful thought, there's an interesting academic post on the Tina Beattie issue on the All Along the Watchtower blog here. It makes some really excellent points with which I have a great deal of sympathy.


I disagree with Professor Beattie’s views on abortion (and other matters), but to attack her in the way that has been done – as though no Catholic should ever dissent from the teaching of the Church on anything – and to make some of the comments I have seen on social media sites, is simply to turn her into the victim of what looks like a witch-hunt. If the aim is to get the Bishops to look at her activity, this seems not the way to achieve that objective. What Bishop wants to look as though he is trying to stifle the freedom of a woman academic to speak her mind?

I think that this comment is a little unfortunate. I certainly would not seek to limit anyone's freedom of speech. The question is about the platform from which one speaks. The post makes much of Austen Ivereigh's post on Catholic Voices blog regarding this subject. Dr. Ivereigh says that as a Professor in a secular university, she has the right to say what she wants. Indeed she does, but this letter is not from "Prof. Beattie of Roehampton University", rather it begins:


We, the undersigned, are Catholics who respect the Church’s moral stance against abortion.

Despite this initial declaration, it then goes on to put a relativistic case regarding abortion which attempts to cite the Magisterium disingenuously, in order to add theological weight to the argument. I fear that the academic standing of Prof. Beattie coupled with the theological argument, would be enough to convince many lay Catholics that this is a valid position for a Catholic to take. But it is not, and to defend, procure or co-operate in an abortion constitutes a grave matter for a Catholic (see CCC 2272). Dr. Ivereigh goes on to make this point himself:


...dialogue must begin with acknowledging the Church’s position. Beattie may not be a licensed representative of the Catholic faith, but she has an intellectual duty to fairly represent her Church’s settled positions.

Yet nowhere does her letter admit that her argument goes hard against settled Catholic teaching that abortion is always the direct and voluntary killing of an innocent human being, and along with infanticide are “unspeakable crimes“, as the Second Vatican Council put it in Gaudium et Spes.

The reason for the outrage over this is not that someone should argue a position contra to Church teaching, it is that they would pervert and misrepresent Catholic teaching in order to justify an erroneous (let's face it- spiritually dangerous) position. And Prof. Beattie is hiding behind her Catholic credentials in order to add weight to her argument.

If Prof. Beattie truly believes what she says, and let's face it, this is not the only issue where she is completely at odds with the Church's teaching, she has to have the courage of her personal convictions, dissociate from the Catholic Church and fight against it - not remain a hypocritical enemy within!

I have absolutely no personal animosity towards Prof. Beattie, but I do feel outraged at her contradictory position, misrepresentation of the faith and apparent protected status by the hierarchy. In fact the most worrying aspect of this is the way that any comments which attack the Church seem to take place within a vacuum of teaching on the subject from those who have the duty to clarify and guide the faithful:

For it is the duty of all bishops to promote and to safeguard the unity of faith and the discipline common to the whole Church, to instruct the faithful to love for the whole mystical body of Christ, especially for its poor and sorrowing members and for those who are suffering persecution for justice's sake,(160) and finally to promote every activity that is of interest to the whole Church, especially that the faith may take increase and the light of full truth appear to all men. And this also is important, that by governing well their own church as a portion of the universal Church, they themselves are effectively contributing to the welfare of the whole Mystical Body, which is also the body of the churches. LG 23

I think the abortion debate does not need to take place from a religious perspective: it is so obvious it can be easily argued from a secular perspective. I welcome that debate, because I feel it is the only way we will be able to win: by convincing the hearts and minds of those seduced by secular false morality. However I do not expect that debate to come from within the Catholic Church herself, the very institution with divine mandate to challenge and confront secular immorality in the world.

Cardinal Nichols has now addressed this, albeit in a very limited way. This event constitutes an excellent opportunity for our Bishops to stand together and address the points raised in Prof. Beattie's letter in a way which would educate and encourage the faithful. This is what I would like to see happen next.

*UPDATE* Great minds think alike and all that: Dr. Joseph shaw has written an excellent post on this also which you can read here.