Brexit - a sorry lack of leadership 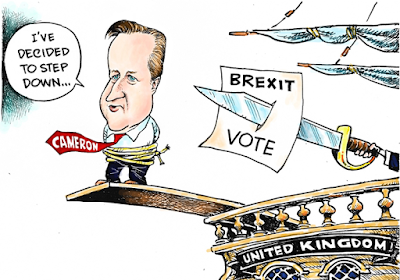 Disappointingly, George Osbourne on Radio 4 this morning seemed to be preoccupied with defending the Remain campaign rather than reassuring the markets. This is in perfect continuity with his speech yesterday, which to my ear seemed horribly self-serving. His true colours are shining through; he is a politician, not a statesman.

I'm feeling really disappointed with all our politicians at the moment. They all seem much more interested in who's going to be the next leader of their respective parties than looking after the country. They are taking time to run over the implications of the referendum decision and repeat ad nauseam how it is not the result they wanted.

I'm so sorry, but if the argument was so obvious one way or another, why on earth did they abdicate responsibility for the decision to the general public in the first place? Can we really be in a place where our Prime Minister has gambled with our country’s wealth, stability, security and international standing in order to sort out an intra-party power struggle? One which he has now lost?

How could it be that the Leave campaign did not offer any precise plans for a future outside the EU? Did they win solely based on nationalist sentiment, xenophobic scaremongering, and exploiting an underlying current of racism? Given the weight of expert opinion, can they Leave camp have really had no expectation for a counter- narrative?


Did the Remain camp expect to win by trying to frighten people into staying because what would happen if we leave would be so bad? This programme seems to be continuing post-Brexit with an extraordinary "I told you so" narrative being preferred over any sort of statesmanship and planning. MP's seem to be choosing melancholy retrospection over necessary and determined planning for a brighter future, because whatever side of the debate you were on, you must be able to see that there are pros and cons to either decision.

I certainly did not find the decision making process an easy one. I found good arguments for voting both ways. I find it extremely distressing to see friends at each other's throats over a difference of opinion on this. It is childish and a disproportionate response. If you want to be cross with someone, be cross with Mr Cameron, the man now walking away from the mess he has made and claiming that SSM is his legacy. No Mr Cameron, if this goes badly, SSM will just be one in a series of poor decisions you have made.