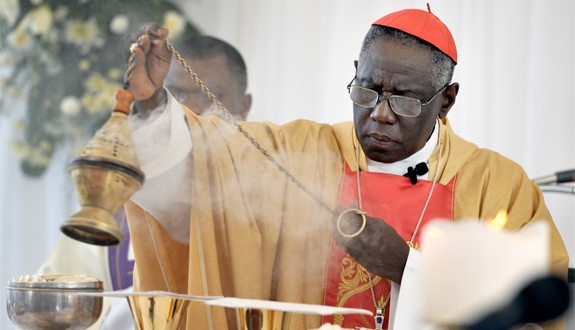 The most recent edition (June 3) of the French publication Famille Chrétienne has a lengthy interview with Cardinal Robert Sarah, Prefect of the Congregation for Divine Worship and the Discipline of the Sacraments, part of which is available online (in French only).

++Sarah strikes me as just what we need more of at this time: a holy, prayerful and wise leader.

While touching on several topics, the focus of the interview is liturgy and worship. As usual, Cardinal Sarah is both eloquent and direct, qualities that will be familiar to those who have read God or Nothing (Ignatius Press, 2015), the Cardinal's autobiographical interview with French journalist Nicholas Diat. As this weekend's edition of the Catholic Herald notes, Cardinal Sarah has become an authoritative voice due to his prayerful approach and evident love of the liturgy.

In this interview, the Cardinal has unequivocally urged all priests to celebrate Mass facing east, saying:


"As soon as we reach the moment when one addresses God—from the offertory onwards—it is essential that the priest & faithful look together towards the east."

Interesting that Cardinal Sarah says "essential" here. I wonder if any priests will pay any attention? After all, the laity can't make this change.

If more priests did effect this change, it would powerfully underline one of the crucial insights of Vatican II: that the Mass is not the action of the priest alone, but of the entire Church. It would also potentially add to the reverence with which Mass is celebrated, by emphasising the transcendental reality of the prayer and sacrifice of the liturgical action. Of course, the reasons for this would need to be explained to the laity before changes were implemented. It might be worth explaining that the directive to face the people can not be found anywhere in the documents of Vatican II?