June 28, 2016
I've received an email from the Coalition for Marriage which relates to David Cameron's Brexit speech and makes some very important points (I've hi lighted some points): 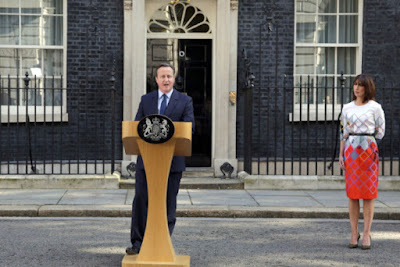 David Cameron named redefining marriage as one of his most significant ‘achievements’ when he gave his resignation speech on Friday. But commentators are saying gay marriage marked the point when his party leadership went wrong. Max Hastings said he “forfeited the support of his party faithful” (Daily Mail, 25 June 2016). Simon Heffer said: “Not only did the Tory party alienate core voters, it also proceeded to bully them” (The Sunday Telegraph, 26 June 2016). Dominic Lawson was a supporter of same sex-marriage but thought it was a political disaster for the Conservative Party. He goes as far as to say that Cameron only proposed an EU referendum in the first place in a bid to try and win back traditional marriage supporters (Daily Mail, 27 June 2016). The PM’s pledge to hold a referendum was made in January 2013, just weeks before Parliament voted on the same-sex marriage legislation. When it came to the Commons vote in February 2013, over half of Conservative MPs voted against the Bill. Ultimately 669,444 people signed our nationwide petition. Speaking from Downing Street on Friday, David Cameron said: “I believe we have made great steps”, including “enabling those who love each other to get married whatever their sexuality”. This is despite the fact that same-sex marriage was never in the Conservative Party manifesto. Cameron even went on Sky News three days before the 2010 election saying that he would not introduce it. Referendum deniedCameron spoke of his legacy after the declaration was made on the leave vote – a public referendum that he denied to the people of the UK on rewriting the definition of marriage. We can look to Bermuda as an example of what can happen when people are allowed to give their view. On the same day that the EU referendum was held in the UK, in Bermuda 69% of voters rejected same-sex marriage. David Cameron says we’re to remember him for redefining marriage when we think of him in the years to come.  As Max Hastings said on Saturday, “he shows no sign of understanding, far less respecting, [the] most deeply-held beliefs” of many people. The PM may be leaving, but the harm caused by the legal redefinition of marriage will have lasting effects. C4M will continue to defend your freedom and your deeply-held belief that marriage is the union of one man and one woman. Please support us in this vital work.

You can donate to the Coalition for Marriage here.
Brexit David Cameron Gay marriage SSM