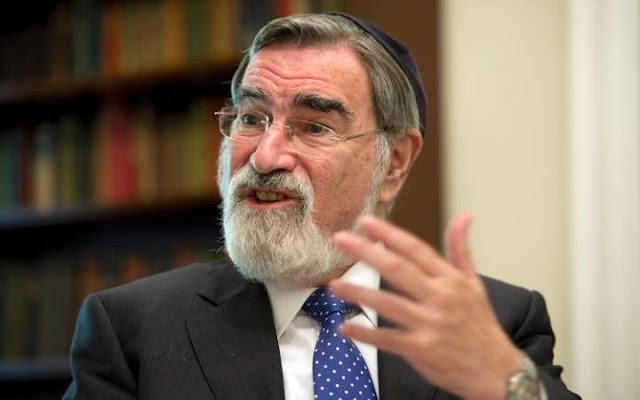 Regular readers of my blog will recognise that former Chief Rabbi Lord Sacks is one of my great contemporary heroes. A man of huge integrity, intellectual thought, and an advocate for civilisation and society. I see him as a real leader: someone I can really look up to and admire. He is a man of vision and courage, who takes his responsibilities as a leader seriously and is always prepared to speak out about important issues with great intelligence and in a way which only ever contributes to the debate.

In an interview with The Telegraph, Lord Sacks has made an important intervention, high-lighting some vital issues for our society today. Among his insights, he points out that:
Showing the same degree of vision demonstrated in a recent homily by Cardinal Antonio Cañizares Llovera, the former prefect of the Vatican’s Congregation for Divine Worship and current archbishop of Valencia, as I reported yesterday, Lord Sacks said:

“The contemporary historian of ancient Greece and ancient Rome saw their civilisations begin their decline and fall, both the Greeks and the Romans attributed it to falling birth rates because nobody wanted the responsibilities of bringing up children, They were too focused on enjoying the present to make the sacrifices necessary to build the future …. all the historians of civilisation have told the same story.”

His points are backed up by the most recent official figures, which reveal a terrufying reality: just over 695,200 babies were born in England and Wales in 2014 – 21 per cent below the peak seen during the 1960s baby boom.

At the same time the population is becoming older, with the number of people over 75 rising by 89 per cent in a generation.

Last year the UK reached a major demographic milestone with the average age of its inhabitants passing 40 for the first time.

The Office for National Statistics pointed out that this would, however, be significantly higher were it not for high levels of immigration.

“Contemporary historians … right now, have failed to find a single historical example of a society that became secularised and maintained its birth rate over subsequent centuries, that’s how great civilisations decline and fall.
The weird thing is that the only people who refuse to acknowledge this really are the new atheists all of whom are worshippers of a figure up in Heaven with a long beard, Charles Darwin. And if Charles Darwin taught us anything it is judge species by their reproductive success.”

It strikes me that this is an agenda which our leads must address. As usual when Lord Sacks says something relevant and important like this, I end up wishing he was a prelate in the Church!
birth rate demographic winter Lord Sacks migration Rabbi Jonathan Sacks