Cardinal Sarah: "priests and the faithful turned together in the same direction – eastwards or at least towards the apse – to the Lord who comes"

July 06, 2016
On June 4th, you may remember this post, which referred to the fact that Cardinal Robert Sarah, Prefect of the Congregation for Divine Worship and the Discipline of the Sacraments had called for priests to say Mass facing East, in the time honoured manner, so that both the celebrant and the people face God to whom they pray:


"As soon as we reach the moment when one addresses God—from the offertory onwards—it is essential that the priest & faithful look together towards the east."


Yesterday saw the beginning of the Sacra Liturgia Conference in London where the opening address was from Cardinal Sarah. Much of what he said has been posted in chunks on their FB page here. But Dom Hugh Somerville-Knapman has an excellent report on the day here.

The big news is that Cardinal Sarah reaffirmed his call to celebrate Mass facing East. The Cardinal, the highest authority on the topic in the Catholic Church under Pope Francis, asked all bishops and priests to adopt the ancient posture in the Mass where the priest faces the tabernacle along with the congregation, rather than facing the people. He asked that the posture be adopted by Advent of this year, which begins November 27. During the same talk, Cardinal Sarah encouraged all Catholics to receive Communion kneeling. During the talk, His Eminence revealed that Pope Francis had asked him to “continue the liturgical work Pope Benedict began.”

by Dan Hitchens, The Catholic Herald's deputy editor called it

The Cardinal own words were:

“It is very important that we return as soon as possible to a common orientation, of priests and the faithful turned together in the same direction – eastwards or at least towards the apse – to the Lord who comes”.

The Cardinal continued: “I ask you to implement this practice wherever possible.”


“Your own pastoral judgement will determine how and when this is possible, but perhaps beginning this on the first Sunday of Advent this year, when we attend ‘the Lord who will come’ and ‘who will not delay’.”

These words were met with prolonged applause in the conference hall. After this, Bishop Dominique Rey of Fréjus-Toulon said that, although he was “only one bishop of one diocese”, he would celebrate Mass ad orientem at his cathedral, and would address a letter to his diocese encouraging his priests to do the same. 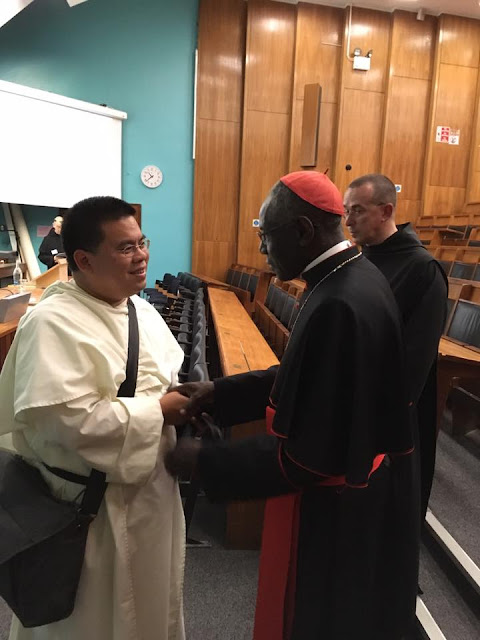 Fr Lawrence Lew, a Dominican Priest, was the photographer for the event and has kindly allowed me to use these pictures. He was priviledged to meet Cardinal Sarah after the event and noted that His Emminence repeatedly asked for prayers. Let us not let him down and pray fervently for this great leader of the Church!

You can see some more of Fr Lawrence's wonderful pictures of this event here.