July 15, 2016
It was a busy week at work last week. I was keeping up with developments at the Sacra Liturgia Conference in London, although I wasn't able to attend myself. Some friends did though, and kept me informed regarding the content of the discussions. My Course Director from Maryvale, Fr Michael Cullinan, was one of the speakers. Delivering a talk on the ethical character of the mysteries. As well as Stephen Bullivant, Cardinal Robert Sarah, Mgr Andrew Burnham, among others.

On Friday, I had to get up at 4am and drive to Chelsea to prepare for a job we have starting at a school there. My good friend Fr Jeff Woolnough suggested we head up to Warwick Street in the evening for the closing Mass of the Conference. Despite being really tired, I jumped at the chance. Any time spent with Fr Jeff is always a great encouragement, and the liturgy at Warwick Street is always uplifting (as you can see from previous posts, eg this one).

We arrived a good bit before Mass began and met Mgr Keith in the Church who informed us that Bishop Rey of Fréjus-Toulon and Archbishop Cordileone of San Francisco, were going to be at the Mass. As regular readers might remember, Archbishop Cordileone is a real hero of mine, a prelate I have blogged about several times before as he is an outstanding leader and a principled and courageous advocate of the Church in an environment that sees Christianity as radically counter-cultural. 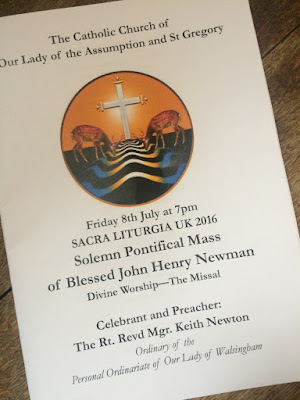 The liturgy was heart poundingly beautiful and afforded a great opportunity for prayer. It was the Ordinariate Rite, which has some beautiful prayers from the Roman Rite, but said in English, such as the Last Gospel and the preparatory Prayers at the Foot of the Altar (see here for more on this).  Mgr Keith delivered a great homily about the importance of objective truth in revealed religion.

Afterwards, Fr Jeff and I were invited to a gathering in the presbytery which was attended by the two bishops who were present at Mass. This afforded me the opportunity to chat with Archbishop Cordileone and even obtain his blessing. He was very easy to talk to and had really enjoyed his visit to England, where he had been made very welcome. He asked that we keep him in his prayers as he undertakes the difficult work of evangelisation in his diocese. He also remarked to me that Pope Francis was an extremely warm and affable man, someone you can't help but like. When I asked him about Cardinal Sarah's liturgical bombshell, he didn't think he would see it in his lifetime, but he did suggest that our Seminarians are the future, and the Lord has blessed us with many holy and dedicated men training for the priesthood at present, God bless them all!

There was great chat at this gathering and most delegates were in agreement that the most important news from Cardinal Sarah's speech was that Pope Francis had commissioned a continuation of the Benedictine reform (the "reform of the reform"). However, it has been an interesting week where the Vatican has now tried to downplay what Cardinal Sarah said. One might think that, with all the trouble in the world, there's more important issues that these liturgical preferences, but it is extraordinary that the Pope, through Fr Lombardi, and Cardinal Nichols, appear to get so uptight over a faithful celebration of the Liturgy offered according to the rubrics and yet are tolerant of all sorts of other liturgical abuse, to say nothing of heresy and immorality? I have to say I have spent not some inconsiderable time scratching my head over this this week. There was such excitement over Cardinal Sarah's suggestions, many priests seemed really upset at the strength of the opposition voiced so swiftly when so many important issues are not remarked on at all. Take the recent Tina Beattie scandal, of which very little was said, despite it being a perfect opportunity to reaffirm and strengthen Church teaching about abortion.

If you are confused about this and want some background, Fr Z has written a few good articles on it, like this one, also Fr Ray Blake, here for example.

Receiving the Blessed Sacrament with reverence, the priest leading us in prayer facing God together, these things are not backwards steps for me, who never knew the EF before the Moto Proprio Summorum Pontificum was promulgated on the 7th of July 2007. I think for most people my age, interested in Evangelisation and growing the Church, these are exciting steps forward (see this post for more on this).

A review of the plain evidence before us currently reveals 0 new students for the priesthood in Westminster Diocese this September and yet there are loads for the FSSP & ICKSP. Given this reality, I can't help wondering if Cardinal Sarah's suggestions of imparting a little more dignity and humility into the Liturgy, so that those who worship are in no doubt who they worship, could be worth a try? Why not try it and see if it has an effect? Just a suggestion.