Some Stats: teaching the faith works, abandoning it to relativism doesn't. 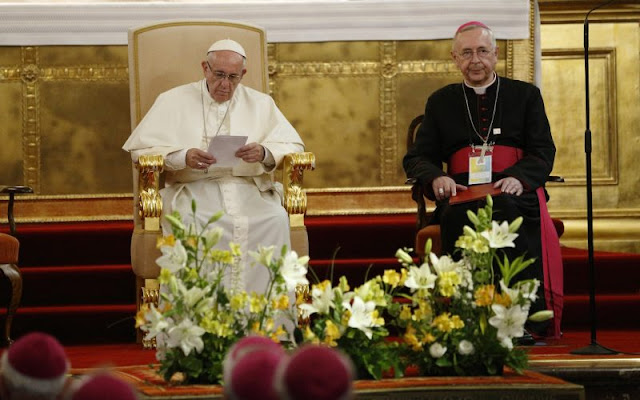 Last Tuesday my post drew attention to the fruits issuing forth from Krakow with regard to vocation and certainly due to pastoral direction of the new Archbishop of Krakow, Marek Jedraszewki.

Today I would like to draw your attention to Archbishop Gadecki – the President of the Polish Episcopal Conference - who is good news too.

Both he and Archbishop  Marek Jedraszewki are contemporaries –and (like most Bishops in Poland – but very few Bishops in the UK), hold Doctorates.

Encouraging Polish priests to have Doctorates was part of the long term planning by St John Paul II when he was Archbishop of Krakow.

I have heard that Fr. Rene Latourelle sj (one of the best Jesuits teaching at the Greg 40 years ago) said to a friend that Cardinal Woytila always used to visit him in his office at the Greg to chat about how the Krakow priests doing Doctorates at the Greg were getting on.

Further good news is found in Polish ordination statistics. The Germans may have loads of money – but they don’t have loads of vocations.

While the German High Priests may wish to throw their considerable financial weight around, I suspect that the Polish Bishops will not take kindly to Teutonic bully-boy tactics.

Now let's look at some of the stats worldwide:

And compare and contrast the number of Catholics & and the number of priests in (to take a particular country purely at random)…… Argentina with the numbers in Great Britain (the stats for GB are for England, Wales & Scotland – but not Ireland).

So if we are worried about the numbers of priests in Britain,  think what it must be like in a country the size of western Europe – with seven times the number of Catholics and FEWER priests.

And then look at the stats of a random Diocese in Poland. The stats for Krakow are particularly eye-watering!

The really key statistic is the ratio of priests to people:

Note: Any changes in boundaries over time are not indicated in the above table.

http://www.catholic-hierarchy.org/diocese/dkrak.html
I heard from one of the Vocations Directors in another Diocese that the recruitment levels in the USA had grown considerably in the dioceses that have followed the Vatican Instruction of 4 November 2005: Concerning the Criteria for the Discernment of Vocations with regard to Persons with Homosexual Tendencies in view of their Admission to the Seminary and to Holy Orders.

The UK Bishops denied that there was any connection between homosexuality and child abuse. But they had not commissioned the sort of detailed report that the US Bishops had. And they had not been faced with bankruptcy as many US Dioceses were.

In short, this is fairly convincing evidence that holding and teaching the faith works, abandoning it to relativism doesn't.