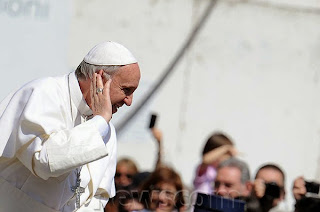 After much speculation on the internet over the last few weeks, today sees the publication of a formal, filial correction of errors being promulgated by Pope Francis delivered privately to the Pope on August 11th.

Since no answer was received from the Holy Father, it is being made public today, 24th September, Feast of Our Lady of Ransom and of Our Lady of Walsingham. The letter, which is open to new signatories, now has the names of 62 clergy and lay scholars from 20 countries, who also represent others lacking the necessary freedom of speech. It has a Latin title: ‘Correctio filialis de haeresibus propagatis’ (literally, ‘A filial correction concerning the propagation of heresies’). It states that the pope has, by his Apostolic Exhortation Amoris laetitia, and by other, related, words, deeds and omissions, effectively upheld 7 heretical positions about marriage, the moral life, and the reception of the sacraments, and has caused these heretical opinions to spread in the Catholic Church. These 7 heresies are expressed by the signatories in Latin, the official language of the Church.

To add your name (the public list will be moderated, i.e. signatories with academic qualifications etc. are especially sought) please email: info@correctiofilialis.org or go to Change.org to support the petition.

You can read the detail of the correction here.

The document has 3 main parts. In the first part, the signatories explain why, as believing and practising Catholics, they have the right and duty to issue such a correction to the supreme pontiff. Church law itself requires that competent persons not remain silent when the pastors of the Church are misleading the flock. This involves no conflict with the Catholic dogma of papal infallibility, since the Church teaches that a pope must meet strict criteria before his utterances can be considered infallible. Pope Francis has not met these criteria. He has not declared these heretical positions to be definitive teachings of the Church, or stated that Catholics must believe them with the assent of faith. The Church teaches no pope can claim that God has revealed some new truth to him, which it would be obligatory for Catholics to believe.

The second part of the letter is the essential one, since it contains the ‘Correction’ properly speaking. It lists the passages of Amoris laetitia in which heretical positions are insinuated or encouraged, and then it lists words, deeds, and omissions of Pope Francis which make it clear beyond reasonable doubt that he wishes Catholics to interpret these passages in a way that is, in fact, heretical. In particular, the pope has directly or indirectly countenanced the beliefs that obedience to God’s Law can be impossible or undesirable, and that the Church should sometimes accept adultery as compatible with being a practising Catholic.
The final part, called ‘Elucidation’, discusses two causes of this unique crisis. One cause is ‘Modernism’. Theologically speaking, Modernism is the belief that God has not delivered definite truths to the Church, which she must continue to teach in exactly the same sense until the end of time. Modernists hold that God communicates to mankind only experiences., which human beings can reflect on, so as to make various statements about God, life and religion; but such statements are only provisional, never fixed dogmas. Modernism was condemned by Pope St Pius X at the start of the 20th century, but it revived in the middle of the century. The great and continuing confusion caused in the Catholic Church by Modernism obliges the signatories to describe the true meaning of ‘faith’, ‘heresy’, ‘revelation’, and ‘magisterium’.

A second cause of the crisis is the apparent influence of the ideas of Martin Luther on Pope Francis. The letter shows how Luther, the founder of Protestantism, had ideas on marriage, divorce, forgiveness, and divine law which correspond to those which the pope has promoted by word, deed and omission. It also notes the explicit and unprecedented praise given by Pope Francis to the German heresiarch.

The signatories do not venture to judge the degree of awareness with which Pope Francis has propagated the 7 heresies which they list. But they respectfully insist that he condemn these heresies, which he has directly or indirectly upheld.

The signatories profess their loyalty to the holy Roman Church, assure the pope of their prayers, and ask for his apostolic blessing.

This is very, very bad, although I can see the Pope has left little choice. Rather than being a big deal, I think this is the first step on a very dark and difficult road. Pope Francis is popular among the people who want to be told the rules do not matter and that sin is not a problem.

I have no doubt the Pope will continue to ignore this, just as he has ignored any other concerns. It is clear he has an agenda he intends to enforce irrespective of theology or the faith or truth. This is perhaps best demonstrated in the document itself by his disregard for the process of synod:

- Your Holiness intervened in the composition of the Relatio post disceptationem for the Extraordinary Synod on the Family. The Relatio proposed allowing Communion for divorced-and-remarried Catholics on a “case-by-case basis”, and said pastors should emphasize the “positive aspects” of lifestyles the Church considers gravely sinful, including civil remarriage after divorce and premarital cohabitation. These proposals were included in the Relatio at your personal insistence, despite the fact that they did not receive the two-thirds majority required by the Synod rules for a proposal to be included in the Relatio.

This is incredibly disappointing.

Meanwhile, we have already seen the Pope's toadies start attacking signatories on Twitter (rather than address the contents of the document). I expect we will see much more of that.

This "correction" to Francis is actually very useful because it shows: 1) the very limited number and marginality of this theologians
— Massimo Faggioli (@MassimoFaggioli) September 23, 2017


More wounds for the Church.

More harm for the message.

More risk and damage for the faithful.