A Benedictine View of the Correctio 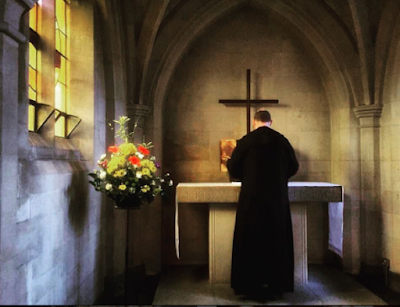 The Benedictine Dom Hugh Somerville -Knapman has written an excellent and incisive blog on the Correctio Filialis here.

His jumping off point is some of the bizarre rhetoric spouted by Massimo Faggioli as I noted here recently.


his breathtaking self-contradiction needs to be noted: accusing those who support the old Mass of being “rupturist”, he then says that what he labels an “extraordinary form of catholic theology” can have “no possible coexistence” with “an ordinary form of Catholic theology”. How can asserting that modern theological opinion cannot exist with doctrine established over the centuries be anything other than “rupturist”!

Faggioli really displays his ignorance in this rant and Dom Hugh appears quite astounded by the depth of it!


This either/or approach to Church teaching—either you are modern or you are wrong—as well as his subtle and pernicious cooption of the name of Joseph Ratzinger in apparent support of his cause, is such atrocious theology that, quite apart from questions of orthodoxy, one wonders how he got a job as a theologian. [my emphasis]

Having articulated his incredulity at the brazen ignorance of Faggioli's public pronouncements, Dom Hugh moves on to explain how this is just one more fruit of the present incumbent of the See of St. Peter, God help him!


Of course, as Dr Faggioli evidences, the pope is, perhaps unwittingly, fostering a new climate of dissent and doctrinal rupture. This certainly deserves to be raised with him, as the Second Vatican Council explicitly allows for.

Dom Hugh sees the Faggioli phenomenon as part of the climate of confusion created by Pope Francis. Confusion the Holy Father seems determined not to clarify, despite the fundamental of his very office and title being about clarity and confirming the deposit of faith. Dom Hugh sees the Correctio as part of a polemic born of this confusion, which is why he prefers the approach of the dubia.


The dubia do not constitute an attack on the pope. Rather they identify the climate of error that has arisen due to the confusion caused by some inconsistencies in Amoris Laetitia, and call on the pope to act papally to clarify Church teaching and put an end to the confusion, a confusion causing a great deal of pain to a great number of Catholics. Moreover, the dubia express a distinctly cardinalatial mission, that of advising the pope.

However, it must be granted that the pope’s unwillingness to answer the dubia has led directly to the phenomenon of the Correctio filialis.

It's unbelievable really isn't it? Especially when seen in this light. The dubia call on the Pope to do his job in a time honoured way, but he has ignored them. Why would he do that?

This bit is brilliant and highlights a really important truth:


It is a bitter irony that when Pope Paul VI issued Humanae vitae in 1968, scores of theologians dissented, and in England there was the infamous letter to The Times in which 56 clergy publicly dissented from the papal encyclical. They were considered heroes of conscience and entire bishops’ conferences instructed their clergy to absolve those married couples who used contraception “in good conscience”. Paul VI’s encyclical did nothing more than solemnly and clearly re-affirm established doctrine.

Contrast it to today when a pope has issued an apostolic exhortation (ie not of the same doctrinal weight as an encyclical) that contains such ambiguities and fudges that it gives succour to those who wish to oppose the established teaching of Christ. Moreover, we have even cardinals calling this papal document, which does so little to confirm the brethren in the truth (one of the papal missions), the voice of the Holy Spirit. But when some, in far more moderate and far less egoistical terms, dare to write to point out the obvious they become villains to those for whom, all of a sudden, it is convenient to support the pope with a sort of neo-ultramontanism.

It is so confusing to me why so many are eager to forge a new way that breaks with the deposit of faith. I took a long while to learn what the Church teaches and why, and to see rupture being forged from such a high place in the Catholic Church is incredibly painful, but I know it is God's Church and not mine. So I trust Him and leave it in His hands, concern myself with prayer and resisting error whatever way I can. It seems so obvious that rupture brings division and a slow death. Yet so many seek this path. The narrow path is harder, to be sure, especially when everyone looks at you as if you're mad and go off contracepting and divorcing and remarrying and aborting. But I am with my Lord and I know the sweetness of His presence and the lightness of His yoke. So how can I accept this deviation from the path He has pointed out?