Criticisms of the Filial Correction 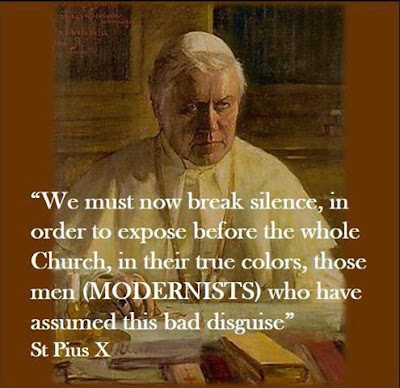 There has not been any substantial academic response to the Filial Correction as I have noted in other posts, but there has been a visceral emotional one.

It strikes me that those who support Pope Francis pastoral over doctrinal approach (an approach condemned as Marxist by Cardinal Müller recently) on this is issue are progressives who never mention his stance on the reality of the devil, or gender ideology. That tells me something. It tells me that what they want is not the Gospel of Jesus Christ, but something more in line with the world, more attuned to the social zeitgeist. A something expressly identified in the encyclical Pascendi Dominci Gregis as the synthesis of all heresies and defined as Modernism.

We are at the point where the Pope appears to be teaching something different from that which the Church has always taught with regard to the nature of sin and reception of the Sacraments. He hasn't explicitly or magisterially said this, but he continues to act in a way that appears to demonstrate a position at odds with settled teaching. This is an existential reality which can be demonstrated in the variations held on the position by bishop's conferences throughout the world. The Filial Correction asks for clarity on this teaching. Why should that be something we are not allowed to ask for?

In an attempt to address some of the criticism levelled at the Filial Correction, Dr. Joseph Shaw has written an article published on Lifestite News.

In this article, Dr. Shaw explains:

The real claim is: the Pope has left us little doubt about how he wants us to understand and apply Amoris, and this understanding is in the last analysis incompatible with the Faith. What Walford would like it to be saying is that Amoris is unambiguously erroneous in itself.

Certain passages of Amoris do, perhaps, point in a problematic direction, but for myself I was ready to read them in light of the preceding teaching of the Church — anyone who doubts this can read the blog posts I composed in the immediate aftermath of its publication. Heck, I even criticised Steve Skojek over it. Now it’s me who is the idiot, along with everyone else who tried to give it the benefit of the doubt. What is key here, however, is not the precise wording of Amoris, but the way Pope Francis has been indicating, non-magisterially, that it should be understood.

Another claim I have heard is that the Correctio causes scandal to the Church. Dr. Shaw explains:


It should be obvious to anyone who loves the Church that it would be far more scandalous if a pope favoured error and faithful Catholics all remained silent.

The problem is that it is not so much the ambiguous language of Amoris Laetitia which is problematic as the (personal) acts of Pope Francis, many listed in the Correctio, which do favour this idea. But that is what the Correctio is ultimately about. As Dr. Shaw points out, Pope Francis does not appear to want the confusion and ambiguity to go. "He could have cleared up the ‘confusion’ at any time by issuing an magisterial statement, but there is value in the ambiguity since it allows a variety of interpretations while some can still claim — correctly — that nothing contrary to the Faith has been formally promulgated. As some of his defenders like to say, a dialogue, answering the dubia for example, would be a ‘trap’. In a sense, any clarification would be a reassertion of the primacy of theological clarity, the magisterium, and rules.

But that position, of refusing to clarify, is crumbling now. We have now had two Cardinals, Müller and the Secretary of State, Cardinal Parolin, calling for a serious engagement between the Vatican and critics such as the signatories and the dubia Cardinals. Perhaps, just perhaps, we are approaching the end game."
You can watch Dr. Shaw and the Papal Posse at EWTN discuss this further in this video. I noted with some surprise that the reaction to the Correctio is very supportive from all the commentators. As Cardinal Parolin has now asked for dialogue, perhaps we are getting somewhere with this as Dr. Shaw suggests!