November 01, 2017
A couple of weeks ago my 14 year old son came along to Saturday Mass without much argument (which I considered to be a bit of a result). The sacristy bell rang and Fr. Andrew Pinsent processed out with Fr. Kevin, Fr. Con and Fr. Basil to concelebrate. It turned out it was his aunty's 50th wedding anniversary and the Mass was being offered for them.

My Son, John, our fourth child, has a complex presentation of Autism which makes him all the more special to us, but he is different and has difficulty communicating. He can appear abrupt, even rude, and tends to be very direct. I explained to John that as well as a priest, Fr Andrew was a prominent particle physicist who worked in the Large Hadron Collider project at Cern. John was sceptical about this saying "scientists don't believe in God dad", so, after Mass, Fr Andrew came up to say hello and I told him what John had said. He gave John a 3 minute master-class in science and religion and explained that all the best scientists do have faith, especially Nobel prize winners. He also told him about working at Cern on the LHC and in the same laboratory as Tim Berners Lee, who invented the World Wide Web & http and his dream to go into space. He said he met a Mexican Astronaut the week before who had just returned from space. He said he had to ask him the obvious question about faith - did the adventure effect his faith. He said that the guy was agnostic before his trip but had experienced a great renewal of faith since going into space. He could not look at the wonder of the stars and the beauty of our blue planet without recognising that there was a creator at work. 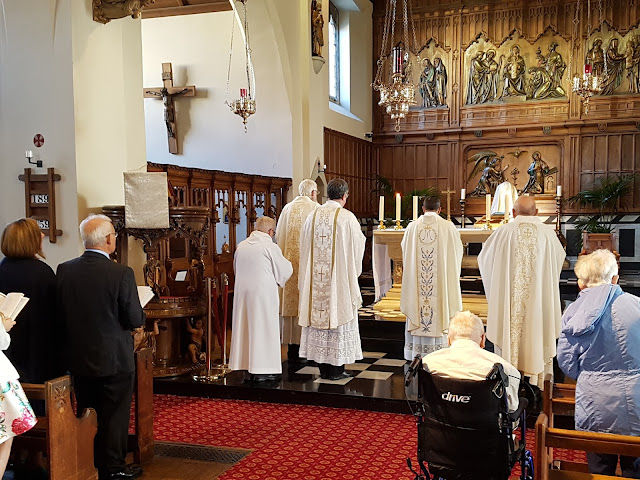 You can hear some of Fr Andrews thoughts on science and faith in this short film: