Hermeneutic of Rupture Made Explicit 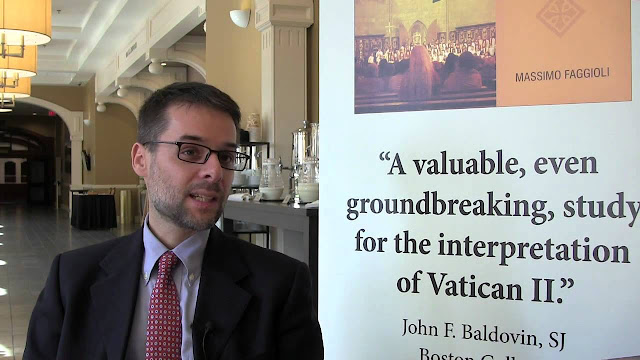 Massimo Faggioli is a Church historian, Professor of Theology and Religious Studies at Villanova University (Philadelphia) and contributing editor to Commonweal magazine. He was on the faculty at the University of St. Thomas (St. Paul, Minnesota) from 2009 to 2016, where he was the founding director of the Institute for Catholicism and Citizenship (2014-2015). Since 2017 he has been an adjunct professor at the Broken Bay Institute - The Australian Institute of Theological Education in Sydney, Australia.

Faggioli is big defender of Pope Francis and well known for being quick with the ad homs and sparse on the theology.

Problem is the theological view conveyed by some of most active promoters of the Old Mass – theological views that are not Catholic anymore
— Massimo Faggioli (@MassimoFaggioli) October 2, 2017

This is the infamous "hermeneutic of rupture" Pope Benedict warned about (see here) made explicit and openly articulated. Father Z takes him apart here.

As the eminent scholar Fr. Hunwicke points out here this is all in continuity with a particular, identifiable direction of travel;


"the currently dominant tendenz has made no secret that this is precisely the plan: a plot to poison the very wells of magisterial teaching. As Archbishop Fernandez has publicly put it, "There's no turning back. If and when Francis is no longer pope, his legacy will remain strong. For example, the pope is convinced that the things he has already written or said cannot be condemned as an error. Therefore in the future anybody can repeat those things without being sanctioned".
There have been heretical popes in the past, but I doubt if there has often been a pope who (according to one of his closest collaborators and admirers) has cunningly plotted to enable heterodox teaching to erupt and flourish under his successor(s); and thus to undermine in advance the teaching of future popes. Strangling renascent orthodoxy before it has the chance to be born, if you will forgive my descent into rhetoric.
Did even Pope Honorius I dare to attempt that?" [my added emphasis]