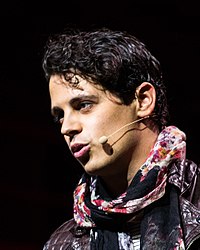 I'm not a huge fan of professional controversialist Milo, I find his confrontational style counter productive, but I know he does shine an interesting light on some issues (if you have no idea who I am talking about, you can glean some background here).

Very interestingly, he has reported (a couple of days ago) that he was sent a series of questions by America Magazine, the controversial Jesuit magazine which has celebrity priest-come-courter of controversy, especially heresy James Martin, as a contributing writer and editor-at-large.

I have posted about Father James Martin on numerous occasions, here when he was called out by Archbishop Chaput for failing to speak with authenticity about homosexuality, here when Pope Francis appointed him to the Vatican communications team(!!), here when he called for the "entirety of the Church's sexual ethics to be rewritten", here when he said that Jesus learnt about His mission from various women he met during His public ministry, and here where he boasted that his heretical ramblings were backed by various bishops and cardinals (not much of a surprise there to be honest).

Just reading Milo's responses, you can clearly see that much of it is self-publicity and in some sense, by linking to his article I recognise that I am feeding that monster. You can see from the very beginning why America chose not to publish his answers, they contradict America's "Gay is OK" mission from the very get-go where he says:


Frankly, what’s really shocking is that a poor sinner like me has spoken out more on contraception than 99% of our bishops, who seem too preoccupied with diversity and climate change to talk about God.

Maybe you mean it’s shocking that I’m always joking about my lack of chastity and my fondness for black dudes, but I still call myself Catholic. And I don’t see what’s so shocking about that, either. One of the most famous saints of all time, sixteen centuries ago, prayed, “Lord, make me chaste, but not yet.”

But perhaps the most interesting and valuable insight comes from the perspective of Milo's very public homosexuality. Asked where the tensions with Catholicism are in his life he answers:


You don’t see me disputing the Church’s teachings on homosexuality. There’s no intellectual tension, because I wouldn’t dream of demanding that the Church throw away her hard truths just to lie to me in hopes I’ll feel better about myself. I love the truth, not lies, and I know no one’s feelings are the basis of truth.

That’s why I don’t understand those Catholics — such as, if you’ll forgive my horrid impertinence, this magazine’s editor at large, Fr. Martin — who imply that if people don’t like what the Church says, maybe the Church is wrong or should apologize. The Church was founded on a rock and a cross, not on a hug.
Still, if you insist I talk about feelings, I’ve said before that I feel there’s something wrong with the fact that my lovemaking can’t produce the mini-Milo’s I’d like to have. How’s that for a subjective confirmation of the Church teaching that same-sex attraction is “objectively disordered” because it can’t lead to procreation?
Bottom line: The Church says I’m not culpable for my temptations, but I shouldn’t sin. She’s right. And her founder said He came to heal those who knew they were sick, so I don’t despair.

Milo has made somewhat of a reputation for himself with respect to articulating truths which uncomfortably contradict the social memes of today and this particular statement resonates with the kind of shocking truth that makes us stop and wonder if the emperor's new clothes are really all that people are saying they are?