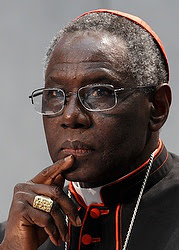 The 'corrections' continue to fly in Rome! A year after Pope Francis clashed with Cardinal Robert Sarah, prefect of the Congregation for Divine Worship, a new embarrassing public rebuke for the Cardinal emerged yesterday.

In a letter, released by the Vatican on October 22, Pope Francis said he wanted to correct several points made in a “commentary,” which Cardinal Sarah sent him and which was published on several websites in a variety of languages.

The Pope’s letter noted that most of the websites “erroneously” cited Cardinal Sarah as the author of the commentary. This is a strange comment from the Pope. How do we reconcile the fact that Cardinal Sarah wrote the commentary but the Pope seems to think he didn't? If Pope Francis thinks Cardinal Sarah did not write it, why write to him to correct him?

The commentary looked at changes Pope Francis made to the Code of Canon Law in the process for approving liturgical translations. The changes were ordered in the Pope’s document, “Magnum Principium” (“The Great Principle”), which was published on September 9 and went into effect on October 1.

The commentary attributed to Cardinal Sarah insisted on the ongoing validity of the norms for translation contained in “Liturgiam Authenticam,” the congregation’s 2001 instruction on translations. But Pope Francis, in his letter, said the changes to canon law take precedence, and “one can no longer hold that translations must conform in every point to the norms of ‘Liturgiam Authenticam’ as was done in the past.”

It seemed that Cardinal Sarah was sticking up for the Pope by saying he wasn't crazy enough to be suggesting the liturgical madness he was being reported as promoting, however, the Pope has now asserted that he did indeed mean to assert such liturgical madness!

The texts for Mass and other liturgies must receive a confirmation from the Congregation for Divine Worship and the Sacraments, the Pope said, but this “no longer supposes a detailed, word by word examination, except in obvious cases that can be presented to the bishops for further reflection.”

Pope Francis also wrote to the Cardinal that the “fidelity” called for in translations has three layers: “first, to the original text; to the particular language into which it is being translated; and, finally, to the intelligibility of the text” by the people.

The new process, the Pope said, should not lead “to a spirit of ‘imposition’ on the episcopal conferences of a translation done by the congregation,” but should promote cooperation and dialogue.

This seems to be an extraordinary rebuke to one of his own Curial cardinals. Remarkably, the Pope has aimed to "explain simply, and hopefully clearly... some errors" in his own prefect for the Congregation of Divine Worship's understanding of Magnum Principium, his recent motu proprio on liturgical translations.

Questions were asked when Magnum Principium was promulgated, see my post here.

Strange that the Pope is so willing to clarify his teaching on this matter while remaining completely silent regarding Amoris Laetitia?

It is interesting to note that Cardinal Sarah – named to CDW in late 2014 by Pope Francis himself– was conspicuous by his absence on Magnum Principium's release in early September: an explanatory note on the new norms was instead issued by his deputy, the English Archbishop Arthur Roche. A former bishop of Leeds and chairman of ICEL – the global coordinating body for English-language translations – Archbishop Roche was received by Francis in a private audience earlier this month.

Yesterday's letter is in fact the third time that one of Cardinal Sarah's responses to Pope Francis has received a direct and very public retort from the Pope. In early 2016, as CDW formally moved to allow women to take part in the washing of the feet on Holy Thursday, a papal letter accompanying the congregation's decree revealed that the Holy Father's directive for the change had been held up for over a year!

Six months later, Pope Francis (through the Press Office) issued a "clarification" that Sarah had been "incorrectly interpreted" in calling for priests to adopt the ad orientem stance in celebrating Mass, which the cardinal urged days earlier at a conference for traditionalists in London.

Soon after the Pope appointed 27 new members of the Congregation for Divine Worship. These changes were widely considered to give a distinctly more liberal character—as well as a more international complexion—to the congregation and seemed likely to curtail the work of Cardinal Sarah, who has been a leading proponent of more reverent liturgy and of “the reform of the reform.”

Last month Cardinal Sarah made a high-profile intervention in the US Church's ongoing wars over homosexuality with an op-ed in the Wall Street Journal, affirming the testimony of author Daniel Mattson who renounced an actively homosexual lifestyle to live in accord with the Church's call to chastity.

In a major speech to Italian liturgists late last summer, Pope Francis declared, "with certainty and magisterial authority," that the Vatican II reforms are "irreversible" – and adding that, for the church, "the liturgy is life, not an idea to be understood."

Meanwhile, canon lawyers are openly discussing whether Pope Francis' authority trumps Cardinal Sarah's erudition on this issue on Twitter and seem to be saying the Pope can't do what he says he is trying to do

With probably the clearest articulation of this question coming from Matthew Roth:

Francis can say what he wants but does the motu proprio actually do what he says it does? Cc @DrKurtMartens https://t.co/vncIYa0uRh
— Matthew Roth (@MatthewJRoth) October 22, 2017

I think, whether you think Cardinal Sarah is right or wrong on this issue, you would be hard pressed to ignore the fact that Pope Francis is acting like a bully with these constant public rebukes of one of his leading curial cardinals.

Why is this important?
There would seem to be a potential for this to result in different translations of the Mass in different areas using the same languages, so you might not recognise a Mass in Spanish in Spain if you come from Mexico, or vice-a-versa.

From the very beginning Pope Francis has been public in his attempts to alter the papacy. His refusal to wear the papal stole on the balcony the night of his election, his adoption of the name of the famously poor “Francis”–a name no other pope presumed to take–his rejection of a residence in the apostolic palace, and his insistence on being primarily “the bishop of Rome” all indicate more than an outward stance. They are signs that he wants to change the office of the papacy itself."

It strikes me that all we see from this is further division of the Church into orthodox and progressive 'wings', these divisions which have always existed are continually nourished by this papacy. Thus we see deeply progressive journalists like Robert Mickens (sacked from the dissenting journal The Tablet for publicly attacking Pope Benedict) calling for Cardinal Sarah's resignation:

Publicly rebuked twice and increasingly sideline by @Pontifex, it is time for Cdl Sarah to resign as prefect of Cong. for Divine Worship.
— Robert Mickens (@robinrome) October 22, 2017

I just want to ask if it is worthy of "dignitas" of a Roman Curia cardinal to make repeated false statements about the pope's intentions https://t.co/QqGdHVOi6n
— Massimo Faggioli (@MassimoFaggioli) October 22, 2017

In short, the usual pro-Francis groupies.

A lot of faithful Catholics see Cardinal Sarah as a real hope for the future of the Church. He is erudite, holy and shows real integrity. If I am totally honest I increasingly wonder about some of the ideas of  Pope Benedict XVI, Cardinal Sarah, et al with regard to what is termed "the reform of the reform". I can see how the EF enriches the NO, but not the other way around. Are these attempts to mitigate a total capitulation that the post concilliar reforms to the liturgy were actually a complete disaster? One thing is certain: the EF & all it stands for seems more important in light of this than ever.