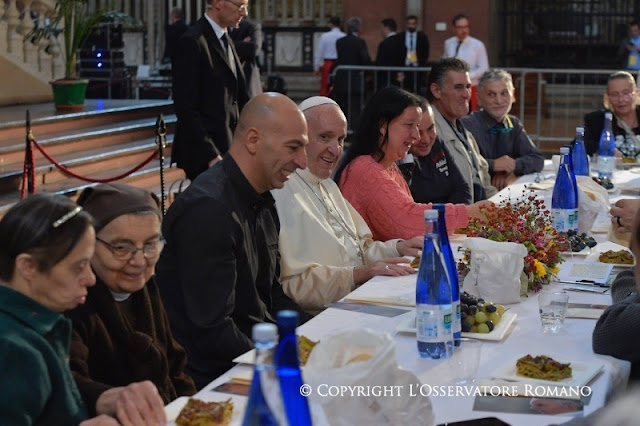 I was genuinely shocked to see the Pope turned Bologna Cathedral in a dining hall. This was a "Solidarity Lunch" with the marginalised, prisoners and refugees apparently, although there seems to be quite a few clergy at table too (there are a number of pictures here).

One of the worst, most damaging post Vatican II moves has been the loss of the sense of Sacrifice from the Mass, instead, it was replaced with the idea of the Eucharist as a communal meal (I have explored this in more detail here). This has led to a growing profanation of the Blessed Sacrament which concerns anyone who believes in the Real Presence. Pope Francis has demonstrated solidarity with this communal meal thing before, as reported here in The Catholic Herald.

If this spectacle is not unfamiliar, especially in England, it is because this is Anglicanism in action. All the dressing up, all the buildings, all pretence, all empty ceremonies. It has been part of the Anglican direction which accentuates the practical, 'social justice' dimension to faith as being more important than any sense of the numinous. After all, it says Jesus Himself broke open a narrow-minded, legalistic practice and replaced it with a more generous, more liberal view, and thereby opened the door for acting rationally in accord with the given situation.

But this is an incorrect understanding as Joseph Ratzinger pointed out in Jesus of Nazareth. This text is deeply Christological  because it features the motif of rest, burden and labour and therefore belongs thematically with the question of the Sabbath. The Son of Man is now Israel's Sabbath: how we act like God. Jesus explicit claim in this scripture entails that the community of His disciples is the new Israel.

What did Christ our Lord say about profaning His Father’s house?


And entering into the temple, he began to cast out them that sold therein, and them that bought. Saying to them: It is written: My house is the house of prayer. But you have made it a den of thieves.
(Luke 19:45-46)

St. Paul the Apostle had something very specific to say about eating and drinking as it relates to divine worship:


When you come therefore together into one place, it is not now to eat the Lord’s supper. For every one taketh before his own supper to eat. And one indeed is hungry and another is drunk. What, have you not houses to eat and to drink in? Or despise ye the church of God; and put them to shame that have not? What shall I say to you? Do I praise you? In this I praise you not.
(1 Cor 11:20-22)

I spoke to a priest about this today and he had not heard this news and was completely shocked:


What hopes for the likes of us in all of this?!
Teaching about the sacrality of the Church.....and people seeing this. Everything we’ve taught against!!!!

After all the years of being a Catholic, it seems to me that a most essential dimension is a reverence for the Blessed Sacrament and our Church buildings as the Sanctuary where Christ resides in sacramental form. This is not something we can pick and choose, and it is not something pre-Vatican II (see Canon 1210, 1211 & 1214, CCC 1181 & 1185 and CDW Directory on Popular Piety & the Liturgy).

The lunch was arranged on a table in front of the sanctuary with hundreds of people watching the spectacle, so that they might witness first hand the Pope's mercy and saintliness.

All this can serve to do is further the Protestantisation of the faith by acting like there is nothing special about our Churches and we can do anything in them - it doesn't matter. 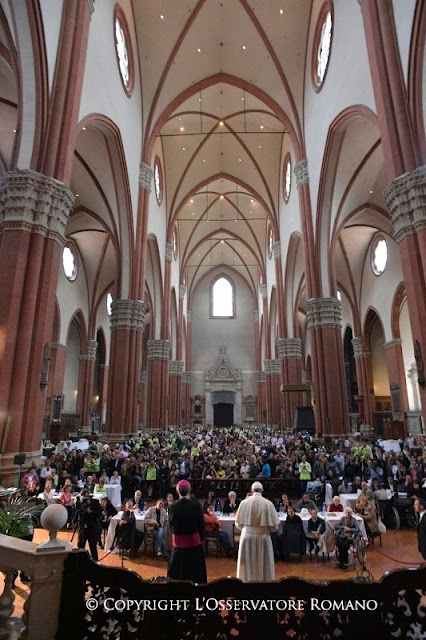