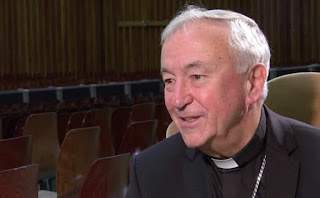 The pro-homosexual organisation Quest was banned from the official Roman Catholic Directory for England and Wales by Cardinal Basil Hume, then-Archbishop of Westminster, because of the organisation's public dissent from Church teaching that called homosexual acts “intrinsically disordered.” The organisation had been listed in the directory as an approved Catholic organisation from 1992.

In a letter explaining his decision to remove Quest from the directory, Cardinal Hume wrote at that time that if an organisation is listed, the “assumption must be that it accepts the church’s teaching set out in a manner that is in no way ambiguous.”

“It is one thing for the Church officially to recognise a support group for Catholic homosexual men and women, struggling, as we all do, to live up to the demands of our shared Christian vocation,” he said, adding that it was clear that an explicit part of Quest’s agenda was “to encourage and recognise loving same-sex partnerships,” something which, he said, the Church cannot accept.

It seems Cardinal Vincent Nichols disagrees. It seems he thinks Quest's agenda, stated on its website as the "acceptance of homosexual relationships by the Catholic Church.” and to help homosexuals reconcile their Catholic faith with the "full expression of their homosexual natures.” is great! Because he has endorsed Quest in a letter to all Westminster clergy!

In a communication a little over a week ago to priests in the Archdiocese of Westminster, Cardinal Vincent Nichols recommended that they make use of the organization Quest to minister to “those who live with a same-sex attraction and are often very anxious about their journey to God and their relationship with the Church.” The letter was leaked to LifeSiteNews.

Let's face it, Cardinal Nichols has a long history of problematic actions relating to Catholic teaching on marriage and sexuality.

In 2011, Nichols praised civil partnerships for those in same-sex relationships, saying that such partnerships “actually provide a structure in which people of the same sex who want a lifelong relationship [and] a lifelong partnership can find their place and protection and legal provision.”

He has celebrated Masses for LGBT Catholics Westminster and given the group his support, despite its open rejection of Church teaching.

In the wake of the 2015 Synod on the Family, Nichols expressed his disappointment that the synod text did not go “far enough” to “respect, welcome and value” people in same-sex relationships.

What is clear is that some, if not many, of his clergy in Westminster are as worried about this as many of the faithful will be. Worried enough to leak the letter. No doubt a witch hunt will ensue, but shouldn't the Cardinal and his team be more concerned with putting out stuff that won't scandalise the faithful by pushing anti-Church positions, than by faithful clergy who feel powerless and scared by such a dangerous position being pushed in the archdiocese?

The letter the Cardinal sent out also recommends Courage, who are excellent and another organisation, LGBT Catholics Westminster: 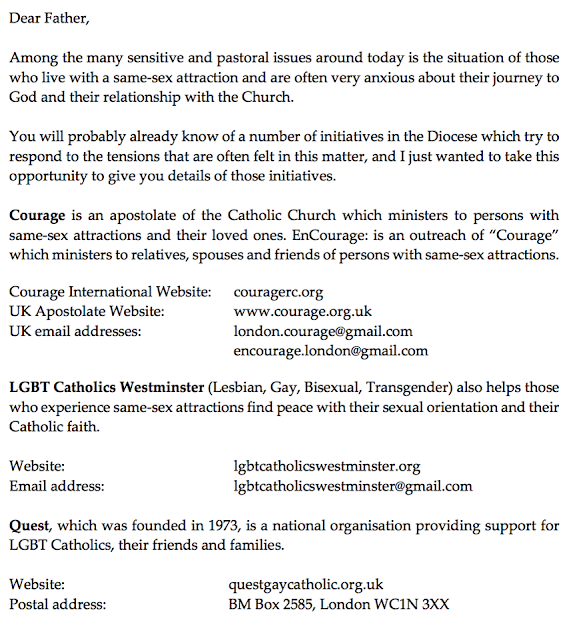 LGBT Catholics Westminster are deeply problematic though, as I have noted before. Their lack of fidelity to Christ and His Church is written all over their Facebook Page here. These are people who self-identify as LGBT, who think the Church is wrong in what it teaches, and who want to change the Church to suit their own sexual predilection.

It is right and good that Catholics with same-sex attraction should be welcomed and cared for, but encouraging them or confirming them in a sinful lifestyle is NOT helping them, nor is it authentically Catholic in any way that can be squared with Church teaching. As Archbishop Chaput of Philadelphia said recently on this issue; while the Church must have “respect, compassion and sensitivity in dealing with persons with same-sex attraction,” this does not give a license to influential leaders within the Church to suddenly start ignoring Biblical teaching on sexuality.

Pointing to St. Paul’s condemnation of homosexual practices, Chaput added: “If the Letter to the Romans is true, then persons in unchaste relationships (whether homosexual or heterosexual) need conversion, not merely affirmation. If the Letter to the Romans is false, then Christian teaching is not only wrong but a wicked lie. Dealing with this frankly is the only way an honest discussion can be had.”

Archbishop Chaput wrote that Jesus “didn’t come to affirm us in our sins and destructive behaviors – whatever they might be — but to redeem us.”

“Paul’s message was as resented in some quarters then as it is now. In an age of sexual confusion and disorder, calls to chastity are not just unwelcome. They’re despised. But that doesn’t diminish the truth of the words Paul wrote, or their urgency for our own time,” he said.

Archbishop Nichols is playing a deadly game here. He is trying to look accepting, liberal and trendy by ignoring Church teaching and playing along with the world, looking to bypass what the Church has always said about an issue that is deadly serious, rather than confront it honestly.

In a social climate which, more than ever needs an authentic Catholic anthropology to give clear teaching and direction on this complex and highly charged issue, he chooses to backslide and walk away from his responsibilities.

We must be brave enough to tell same-sex Catholics the truth: your sexual attractions ARE NOT your identity. You see Cardinal Nichols, it's really not that hard.