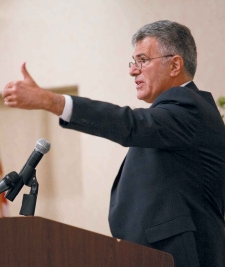 Rorate Caeli draw our attention to the following valuable information:

There is a great deal of good Catholic audio to be found on the internet nowadays. We want to alert our readers to things in particular.

First, our friends at the Roman Forum have put a large number of lectures on Church History by John Rao up on Soundcloud. Included are the completed lectures of the current year (2016-2017), which is about the years 1794-1846, and all the lectures of last year (2015-2016), which was about the years 1748-1794. We encourage our readers to take a break from current events, and recall the Church’s struggles in previous centuries. The eighteenth and nineteenth centuries were periods in the Church’s life with many parallels to our own. The temptation to water down the faith, and try to make it palatable to modernity can be found then as now. And Rao masterfully shows how all attempts do so were counter-productive and disastrous, whereas attempts to recover the fullness of the Church's Tradition bore great fruit.

Second, also on Soundcloud (as well as iTunes and Google Play), is a new podcast by The Josias, a website devoted to the Social Doctrine of the Church, which we have long linked on our sidebar.

The first three episodes cover the important concepts of the common good, integralism, and rights respectively. In each case, the podcasts try to illumine the topics from the fullness of the Church’s tradition, and the perennial philosophy of St. Thomas Aquinas. It is important in these times especially to remind ourselves again and again of the perennial truths.
Catholic Social Teaching Church history Rao Social Doctrine