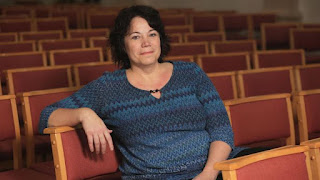 Premier reports that prominent Church of England evangelical Lorna Ashworth has left the Archbishops’ Council in protest over what she described a "revisionist agenda" and “heretical teaching”.

Ashworth resigned yesterday over the Church’s increasingly relaxed approach to gay couples. She is one of a number of signatories who put their names to an open letter sent to the Telegraph in July, warning that the Church had "capitulated to secular values".

In the past, she has spoken out against women bishops and gay marriage and in her letter of resignation, she is said to have stated:

“I refuse to be mistaken as one participating in the fanciful notion of ‘good disagreement’”.
"In light of this revisionist agenda and the heretical teaching that comes with it, I am no longer willing to sit around the table, pretending that we, as a governing body of the Church of England, are having legitimate conversations about mission".

"Those who elected her were of the view that she had much to give to the working of the Council, especially in the area of Renewal and Reform.
"However, I do not share her doubts that the Church of England will be part of God's renewal of the Christian faith in this nation,"

It sounds to me like the archbishop of York has his head firmly in the sand. I say 'seems' because I don't know his heart, but what we can see clearly is someone who denies the Bible expecting, somehow, the truth of the Bible to just suddenly dawn on everyone in a revival?

Meanwhile, Ashworth suggested that other church & Synod members could follow her lead stating:

"There are many like myself, who long for clear and courageous biblical leadership from the bishops of the Church of England and we will pray to this end. Some will choose to remain as part of the Synod and they have my full support, but others will not".

Back in July, Mrs Ashworth said:

“Until we have a House of Bishops full of shepherds who stand only for the truth . . . our work can only offer confusion and plurality to a lost and dying world.”

You can read a statement on the resignation of Mrs Ashworth from the General Synod and Archbishops’ Council here.

It is hard to argue that the CofE is anything but in full capitulation to the secular age, moreover it is paying the price for its' lack of conviction (as the stats linked to in this post detail the CofE will soon become completely obsolete unless something extraordinary happens).

It is hard to see how this capitulation can achieve anything other than a further undermining of Christian moral authority as the established Church in England seeks to distance itself from what has been consistent Christian doctrine for two thousand years, as well as the key authoritative document for anyone who seeks to follow Christ. I recognise a familiar dialetic which speaks from inside the Church and spins this as a false kind of doctrinal "development" even though it does not square with Newman’s rules (so to speak) for the development of doctrine yet somehow it sees as perfectly legitimate. The sad truth is that this narrative necessarily suffers a particular form of blindness in that it fails to recognise the reality. The reality is that any vaguely objective examiner could only find inconsistency and a determined sophistry which seeks only to kowtow to modern secularism as a greater wisdom than any revealed in the Scriptures.

One can see how such a direction is motivated from a genuine desire to be merciful where it appears the truth, Christian history & Tradition, doctrine, etc, is merciless, but truth does not care about your feelings and we are seekers of the truth.

Huge kudos then to Mrs Ashworth, who publicly chooses Christ over the Sophists. Who courageously accepts the cost of her fidelity to Him over the material wealth and glamour of high office in the temporal/ physical world. What is the narrow path if not rejecting the easy option of doing what the world demands to stand with Christ and tell the difficult truth?

As for these others who seek high office and to retain their position; what can we surmise of them? It seems many in these positions (in the Catholic Church too) have long given up any faith in the Sacred nature of Scripture or the transformative power of the Gospel message. Now they seek only a kind of spiritualised socialism and feminism in opposition to the Gospel of our Lord Jesus Christ. This is the dangerous heresy clearly defined by the Catholic Church: Modernism. Those who appear to see a need to soften or even change the timeless teachings of the Church to make them more palatable or compatible with the age. The attitude that continues to weaken and divide the Church of England, drawing her away from her Scriptural roots, causing her to change direction from her Tradition (which is drawn from Catholic Tradition in some sense) is quite clearly Modernism: an ideology by which religious truths, and especially Catholic teachings, are derived and interpreted in accordance with personal religious experience, under the influence of the spirit of the current age.

This accomodationism is the driving force behind a bland, insipid Catholicism which seeks to rob the Cross of all power, seeking to contradict Christ's call to repentance and replace it with a Gospel of accompaniment and message that all are welcome. It increasingly seems to me that the driving force for this Modernism and all the problems which follow with it, is based on a false ecumenism as its' driving force and agenda. The CofE is, in a way, an attempt at this kind of ecumenism, an attempt to gather a broad church of believers. An attempt to say that we can all gather without truth being present, or necessary. But if that is so, we are learning how impossible and improper this vision is as we watch its' slow, painful demise.
What worries me most is the way so many priests and bishops in the Catholic Church appear so eager to follow them despite the clarity of the unavoidable results from such a direction.

They didn't crucify Jesus because He was a 'nice' man.