Sophistry is Killing our Culture 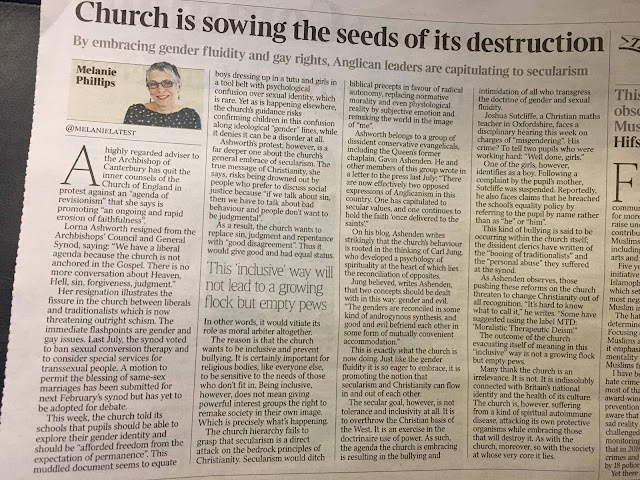 A number of friends have drawn my attention to Melanie Phillips' article above which addresses the crazy news coming out of the Church of England at the moment regarding the ever pernicious and aggressive transgender agenda. This is further to a "bullying Guidance" document released to CofE schools, which, much like the disgraceful Catholic Education Service document released recently, purports to be about stopping bullying whilst actually being a tool to further a clear anti-Christian agenda with the most impressionable children.

This prompted the resignation of one of the Archbishop of Canterbury's closest advisers at the weekend, as I reported here.

With regard to this resignation, Melanie Phillips suggests:


Ashworth’s protest, however, is a far deeper one about the church’s general embrace of secularism. The true message of Christianity, she says, risks being drowned out by people who prefer to discuss social justice because “if we talk about sin, then we have to talk about bad behaviour and people don’t want to be judgemental”.

This is familiar isn't it? It is certainly a particular priest in this diocese' modus operandi, commented on by quite a number of people as remarkable and largely at odds with the mainstream of Christianity. Indeed, doesn't this sound precisely like the ideology driving James Martin, Thomas Rosica and all those pushing hard in the Catholic Church for the primacy of conscience? It is an approach predisposed for failure. It does nothing help to shape or engage with anyone's worldview, it fails to provide anything remotely approaching an authentic Catholic epistemological framework, instead it tries to 'fit in' to the viewpoint of the age which, as Melanie Phillips points out, is fundamentally anti-Christian. This approach therefore sets people up with an impossible choice around the fact that all the information people receive from the world tells them that the Church is bigoted and people intuit that the world views are incompatible. One must be true and one false. If the Church is constantly trying to mitigate its' position and conform to the world, its' clear who has it wrong, isn't it?


As a result, the church wants to replace sin, judgement and repentance by “good disagreement”. Thus it would give good and bad equal status. In other words, it would vitiate its role as moral arbiter.

This seems blindingly obvious, and as obvious (if not more so) for Catholics as for Anglicans.

A constant and articulate critic of this process of divorce from Christianity is Gavin Ashenden, former Anglican Chaplain to Her Majesty the Queen who, on 17th March 2017 lodged a deed in the High Court of London under the Clerical Disabilities Act 1870, to relinquish his orders within the Church of England having concluded it is suffering from a terminal antipathy to Christianity (see here for more details). Phillips quotes Ashenden and notes that:

Ashenden writes strikingly that the church’s behaviour is rooted in the thinking of Carl Jung, who developed a psychology of spirituality at the heart of which lies the reconciliation of opposites. Jung believed, writes Ashenden, that two concepts should be dealt with in this way: gender and evil. “The genders are reconciled in some kind of androgynous synthesis, and good and evil befriend each other in some form of mutually convenient accommodation.” This is exactly what the church is now doing. Just like the gender fluidity it is so eager to embrace, it is promoting the notion that secularism and Christianity can flow in and out of each other.

The secular goal, however, is not tolerance and inclusivity at all. It is to overthrow the Christian basis of the West. It is an exercise in the doctrinaire use of power. As such, the agenda the church is embracing is resulting in the bullying and intimidation of all who transgress the doctrine of gender and sexual fluidity.

Are you getting it yet?

OK look at this article which Sebastian Morello posted on Facebook today:


“If someone feels that they feel at home with a certain religion, a certain race, a certain culture, I think that, if that’s who they really feel inside, life is about finding out who you are. The more knowledge you have of yourself, the happier you can be"

Sebastian comments: "it's really worth reading that quote above a couple of times. Note, there's no sense of comparable categories, no clear anthropology from which to work, no objective criterion for human happiness and flourishing; there's just a set of unjustified (and untenable) propositions.

Dr Schreckner has nothing to work from but the feelings of her 'patient', so she has to work out whether he "feels that he feels" this or that. She has no clue that everything she says here presupposes a defunct anthropology of innate ideas and personal identity independent from the human body, which can then be imposed on the human body. She's basically talking about the res cogitans and the res extensa, but doesn't know it; in turn, nor does she know that philosophers have stripped that view and exposed its errors for centuries. Essentially, with Dr Schreckner, you have here a complete idiot with a lot of undue authority, leading unwell people into harming themselves. It's due to people like Dr Schreckner that I sympathise with Karl Popper's judgement: The modern discipline of psychology is little more than sophistry, and should be deemed a pseudoscience, like fortune telling."

How do I know this is true? Because I am a Catholic who has studied it. Why then are fellow Christians rushing down this path in such a rash manner? Why are Catholic and Anglican organisations enshrining this pseudo-psychology in their approach for the youngest, most impressionable members of our Christian family? As one friend put it: Sophistry is killing our culture. and without a coherent, common anthropology enormous damage is being done and especially to our children who are fed this drivel from their schools and the media.

Christians should be intelligently engaging with this danger, our bishops should be leading the charge, not facilitating its take-over!