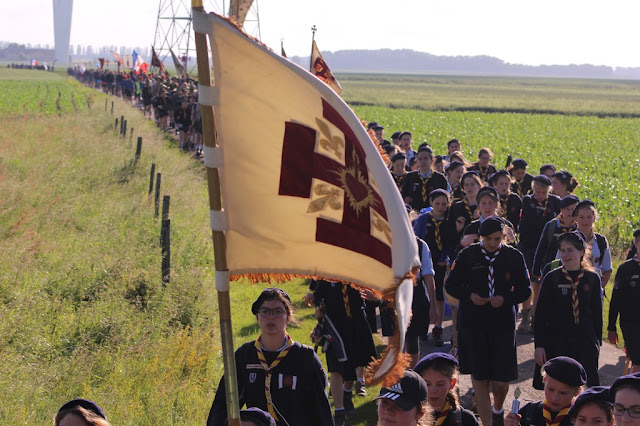 The Paris-Chartres Pilgrimage occurs every year on the Feast of Pentecost in early summer, and is a multi-generational, multi-national gathering of Catholics who draw closer to God through the centuries-old act of pilgrimage.

The walk is roughly 62 miles over 3 days—beginning at daybreak on the Saturday before Pentecost, and ending with an afternoon mass on the Monday after Pentecost. The trek takes 8,000-10,000 pilgrims from the Cathedral of Notre Dame in Paris, through the French countryside to the Cathedral of Notre Dame in Chartres. Participants brave the weather, blisters, and humble food and accommodations as an act of faith and an act of reparation in these modern times.

If you want to get a flavour of the pilgrimage, I recommend you check out CC Father's blog, where he has kept a valuable record of his experiences on the pilgrimage over a number of years and with numerous children in tow.

Last year, Cardinal Burke offered the Mass at Chatres and received an extremely warm welcome. This is a video review of last year's pilgrimage:

Notre-Dame de Chretiente (NDC)—the organisation responsible for what has been described as the ‘most important annual event in Christendom’ has announced that Robert Cardinal Sarah will offer the Pontifical High Mass in the Cathedral of Notre Dame de Chartres at the next pilgrimage to Chartres, May 21, 2018.

A NDC statement announcing this most welcome development, reads: “We sincerely thank Cardinal Sarah, Prefect of the Congregation for Divine Worship and the Discipline of the Sacraments, for having accepted to come and join us on pilgrimage. We are happy to organise this event, which will be an important landmark in the history of our pilgrimage.”

Let's see this in the relevant context: Cardinal Sarah, a curial Cardinal no less, who recently suffered a public correction from the Pope, is going to celebrate probably the most high profile solemn high pontifical Mass for 15,000+ pilgrims!

Here's a reminder of what happened with the correction:

From the modernist/liberal perspective, what does this say about the direction of the Church? People like Michael Matt at the Traditional Remnant are suggesting that this is part of an awakening that is going on in the Church as a result of the present Pontificate. Pope Francis may not be achieving the reform he promised in the way he wanted, but he is having an effect.

@Card_R_Sarah to celebrate a Pontifical High Mass at the end of this year’s Chartres Pilgrimage. This is important news for the Traditional Latin Mass #latinmass pic.twitter.com/UUCXHxhsEW
— Latin Mass Society (@latinmassuk) February 6, 2018