Devastating Accusations Levelled at Head of Pope's Council of Cardinals 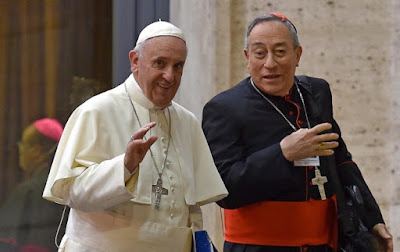 Remember Pope Benedict XVI asking us to pray that he would not flee from the wolves? Well we are now seeing what life under the wolves is really like. Day after day, scandal after scandal. Yesterday we had this:

Cardinal Maradiaga is head of the Pope’s Council of Cardinals and a close friend of the Pope. These accusation of financial and personal malfeasence are devastating. The Pope is said to be investigating. https://t.co/mDoro9sFDp pic.twitter.com/kmhEr6kVC4
— Raymond Arroyo (@RaymondArroyo) December 21, 2017

Basically the story is that Cardinal Oscar Maradiaga, one of Pope Francis' closest friends and advisers and coordinator of the Council of Cardinals no less, who, like the Pope himself, is constantly preaching about "the poor", received half a million euros a year from a University in Honduras. Pope Francis has called for an investigation into millionaire investments and more inappropriate behaviour from one Bishop Pineda, a follower of the cardinal.

A report in L'Espresso says the accusations are varied and many and include an inappropriate close relationship with Erick Cravioto Fajardo, a man who is not ordained, yet passes himself off as a priest, lives "adjacent" to the Cardinal with Pineda and received cars and an apartment which are reported to have possibly come from the diocese or the university.

Accusations also include investments in the millions gone catastrophically awry: Maradiaga supposedly transferred large amounts of the diocese’s funds to some financial companies in London, like Leman Wealth Management (whose owner is one Youssry Henien, as the registers of the Company House of England and Wales show). Now part of the money entrusted (and deposited in accounts in German banks) seems to have completely vanished!
Bishop Pineda, has been reported in local newspapers as being the man who orchestrated reckless financial operations and the recipient of public funds (for as much as 1.2 million dollars) allegedly destined to obscure projects aimed at "training of the faithful to the values ​​and understanding laws and social life". According to the accusers, these expenses were never supported by valid documentation.

Cardinal Maradiaga is a liberal, Modernist, political Leftist, who was President of @iamCARITAS and President of the Latin American Episcopal Conference, and the Vatican's spokesman with the International Monetary Fund and the World Bank. I'm not surprised... https://t.co/Q2tLT3acoJ
— Catholic Sat (@CatholicSat) December 21, 2017

The Vatican is particularly concerned that the Court of Auditors of Honduras’ is launching an accounting probe on the Catholic diocese there between 2012 and 2014. The prosecutors at the Tribunal Superior de Cuentas want to see clear about the lawfulness of the projects run by the Foundation for Education and Social Communication, which the government transferred tens of millions of lempiras every year, and whose official representative is still Maradiaga. As of the time of writing — so in a letter from the prosecutors L’Espresso obtained — the church did not produce the records on assets and liabilities and expenditure documentations.

Given Maradiaga's vaunted position, the first question that springs to mind is to what extent he influenced Pope Francis' sacking of directors and auditors at the Vatican Bank? How did the University have so much money to give him, where did it come from and under what auspices?

Cardinal Maradiaga is over the age of retirement for bishops, but is still the Metropolitan Archbishop of Tegucigalpa. Why hasn't the Pope named a successor, when he has known about this scandal for six months? One has to think that if he had been a conservative he would have gone as soon as he reached 75!

Father Ray has a list of further questions here.

Meanwhile Father Z has some interesting context on this story here which involves a personal attack the cardinal made on him. He also mentions that as CRUX and some other outlets reported a while back Cardinal Maradiaga bitterly attacked Raymond Card. Burke and even indulged in name-calling.

[…]
He was among four cardinals who submitted a set of questions, called dubia, to Francis, seeking to dispel what they described as “grave disorientation and great confusion” created by the document.
In the new interview, Maradiaga comes out swinging.
“That cardinal who sustains this,” Maradiaga said, referring to the criticism of Amoris, “is a disappointed man, in that he wanted power and lost it. He thought he was the maximum authority in the United States.
“He’s not the magisterium,” Maradiaga said, referring to the authority to issue official teaching. “The Holy Father is the magisterium, and he’s the one who teaches the whole Church. This other [person] speaks only his own thoughts, which don’t merit further comment.
“They are the words,” Maradiaga said, “of a poor man.”
Maradiaga also criticized conservative schools of thought in Catholicism, of which Burke is often seen as a symbol.
“These currents of the Catholic right are persons who seek power and not the truth, and the truth is one,” he said. “If they claim to find some ‘heresy’ in the words of Francis, they’re making a big mistake, because they’re thinking only like men and not as the Lord wants.
“What sense does it have to publish writings against the pope, which don’t damage him but ordinary people? What does a right-wing closed on certain points accomplish? Nothing!
“Ordinary people are with the pope, this is completely clear,” Maradiaga said. “I see that everywhere.
“Those who are proud, arrogant, who believe they have a superior intellect … poor people! Pride is also a form of poverty,” he said.
“The greatest problem, however, is the disorientation that’s created among people when they read affirmations of bishops and cardinals against the Holy Father,” he said.
Maradiaga called his fellow cardinals to loyalty.
“I think that one of the qualities we cardinals [should have] is loyalty,” he said. “Even if we don’t all think the same way, we still have to be loyal to Peter.”
Whoever doesn’t offer that loyalty, he said, “is just seeking attention.”
[…]

Pope Francis seemed to make a direct reference to Maradiaga in his annual Christmas address to the curia where he said 'Betrayers of trust' are frustrating Vatican reform. This annual "insult-fest" has become an occasion of deep embarrassment for the Church.

From the Pope’s Christmas message to the Curia today: intellectual blither. Self contradictory non sequiturs.

Clearly the pope has never learnt much about the fine art of leadership. Publicly berating the people you need to accomplish your goals practically guarantees they will do everything in their power to prevent success. That is if anyone remained awake! In full keeping with his reputation for verbosity (Amoris laetitia was the longest papal document ever) the speech ran to 4,300 words, with 28 footnotes.