Far from gossip, The Dictator Pope is "absolutely reliable" 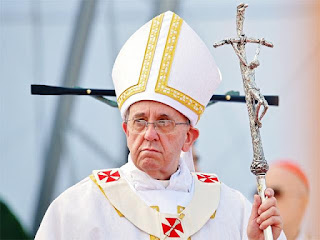 A few of days ago I posted about a new book called The Dictator Pope which has been really causing a stir as it claims to be the inside story of the most tyrannical and unprincipled papacy of modern times.

Now this was first posted on One Peter Five, which I love, but some criticise because it is a site critical of progressive catholic attitudes and modernism. Anyway some people these days dismiss certain sources because they tend to contradict their own agenda. I don't, as I have said here numerous times before, we are all parts of the body of Christ and that body has many parts (cf. 1 Cor 12). If I agree with everything someone says, I'm probably reading my own blog. We all get it wrong sometimes.

Anyway, I was concerned initially that this would be seen as a diatribe against the pope with an agenda. This would make the contents easier to dismiss.

Almost read “The Dictator Pope”, of course it is all libelous gossip, the Church is not a dictatorship, is it?
— raymond blake (@raylblake) December 6, 2017

But I have seen some remarkable comments and it is very interesting that, as the week has progressed, this book has been taken up and reported on by the mainstream, including the Papal Posse on EWTN last night! SEE VIDEO HERE

Robert Royal has this report on The Catholic Thing where he says:


This is an all too brief account of a remarkable new book on the pope, which is making waves in Rome and around the world.

He goes on to say:


the case he lays out is largely convincing: that Pope Francis has carefully cultivated an image in public as the apostle of mercy, kindness, and openness; in private, he’s authoritarian, given to profanity-laced outbursts of anger, and manipulative in pursuing his agenda.
This is hardly news, least of all in Rome. This volume, however, is far more probing and detailed than anything that has previously appeared. It sometimes stretches evidence, but the sheer amount of evidence it provides is stunning. About 90 percent of it is simply incontrovertible, and cannot help but clarify who Francis is and what he’s about.

The parts of this story I know best – the Synods on the family that I reported on daily from Rome for TCT – are absolutely reliable.

Wow! 90% is incontrovertible?! That is a bit of a bombshell considering the contents of this book! Certainly gives it more credibility than I was prepared to at first glance. Colonna's book also casts doubt on Austen Ivereigh's sycophantic biography of Pope Francis:


Austen Ivereigh, a British writer and papal fan, entitled his biography The Great Reformer, in part because of Jorge Bergoglio’s alleged role in curbing abuses in Buenos Aires. Colonna doubts the truth of that account, and not only because of Francis’s lack of action in Rome. He thinks the Argentinian stories should be re-examined.

Royal goes on to one of the most troubling aspects of this papacy:

Then there’s the gay mafia. People forget that the occasion for Francis’ famous remark “Who am I to judge?” was not a general comment about homosexuality. It was in response to a question about Msgr. Battista Ricca, who was involved in several notorious homosexual scandals, some right across the river from Buenos Aires in Uruguay. Nonetheless, right after the 2013 papal election, he became the pope’s “eyes and ears” at the Vatican Bank and director of the Casa Santa Marta, where Francis resides.

And then there’s the troubling, casual resurrection of figures like Cardinal Gottfried Daneels, once thoroughly discredited for his support for contraception, divorce, gay marriage, even euthanasia and abortion – and outrageous mishandling of priestly abuse. But he stood with Francis on the balcony of St. Peter’s right after the conclave and read the prayer for the new pope at his inauguration. He was also one of the ringers Francis personally invited to bolster his case at the Synods.

The thing about Pope Francis is the sheer amount of bad stuff he says, does and gets involved with. It seems to me impossible to defend, yet some still doggedly do. Whether out of some misunderstanding about the role of the pope in the Catholic Church or an actual desire to see the structure and fabric of the faith shredded without regard, who can say? The Catholic Herald even reported on this book, a report that did not fail to raise a few eyebrows - see for example here the pro-Francis Twitter account widely reputed to be a sock puppet of one of Pope Francis' chief wombles, Fr Spadaro:

Why is the Catholic Herald plugging an ebook attacking #PopeFrancis? It isn't "making a stir" in Rome. Hardly anyone has heard of it - hence the frantic attempts at promotion by conservatives. pic.twitter.com/8GmTtpSwuT
— Pope news (@Pope_news) December 6, 2017

I'm sure Spadaro could have squeezed a few puppies or something into that tweet f he had really tried! Why are the nasty people being nasty to lovely cuddly Pope Francis?? Look here are some puppies to prove how cuddly and lovely he is! It is a sad metaphor for the way this papacy tries to manipulate the faithful, many of whom can no longer ignore the glaring (and frankly embarrassing) inconsistencies in this papacy.

++Kasper: #Pope’s official endorsement of Buenos Aires bishops’ guidelines “hopefully ends” the ”tiresome” debate over Amoris. “The flaw in the critique of #AmorisLaetitia is a unilateral moral objectivism that undervalues the importance of personal conscience in the moral act.” https://t.co/5mBsW8NCWY
— Edward Pentin (@EdwardPentin) December 9, 2017

At this point, anyone who cares knows the jig is up. Pope Francis has been commissioned with a task which contradicts the function and truth of the Church founded by Jesus Christ, but he appears to be going even further than that with the mandate handed to him by the Cardinals at conclave, to a place where even his own foot-soldiers are confused about what counter-intuitive, anti-catholic nonsense they are supposed to be spouting at any particular moment and hence they are more often than not at odds with one another, as well as the Church herself. As one friend who works in an important position in the Church commented to me earlier today:


"However high their office, Pope’s don’t trump Christ, contained in the written and unwritten tradition by which He reveals himself. To attempt to do so is a form of “non serviam”.