Author of The Dictator Pope comes out of the shadows 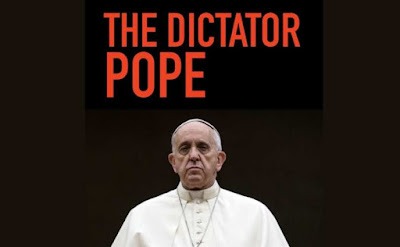 The Italian publication La Verità has secured an interesting interview with the author of The Dictator Pope, the pseudonymous Marcantonio Colonna.


"It was necessary to use a pseudonym because, as the book tells us, Pope Francis takes merciless revenge on those who oppose him. For example, the three assistants of Cardinal Müller who were dismissed in October 2016 for alleged criticism of the Pope."~Colonna


In this interview, Colonna says that the media image of Pope Francis is one of the most amazing scams of contemporary life. All who work in the Vatican know the abyss between that image and reality and we should not be surprised that someone eventually reveals the truth.

Asked why he wrote the book, he explains that he intends it "to prevent the Church from making a similar error again. That is to elect as Pope a little-known cardinal who turns out to be very different from what he seemed."

According to Colonna Pope Francis is "sovereign who exercises his personal will in the contempt of law and justice." He managed to discover that Pope Francis' Jesuit superior in Argentina actually wrote a report which said Bergoglio was not suitable material for the episcopacy as he lacked psychological balance, was of a subtle nature and had been a divisive figure when he was a Jesuit provincial in Buenos Aires. Interestingly, Colonna asserts that the copy of the Jesuit superior's report that was in the official Jesuit archive in Rome disappeared when Bergoglio was appointed Pope.


"Several journalists have commented, regarding my book, that it contains little new, and in fact most of it is based on articles that have been published in the last four years, for example those by Sandro Magister. It was simply a matter of putting the material together. However, I think an important contribution provided by my book is in the second chapter, which describes the past of Jorge Bergoglio in Argentina, where he was known as a cunning and manipulative politician in the Peronist tradition. Even here, there is little new for an Argentine, but these are facts not known to the rest of the world, because of the language barrier. I was simply the vehicle to translate them." ~Colonna

He also says that Pope Francis was elected to reform the Church (as suggested by the reported exchange between a Cardinal and the Pope recently), has discovered that he can control the curia more effectively through the corrupt figures that depend on him for power. "They obey him blindly." Colonna says the book does not represent a solitary voice, but expresses the concerns of many people - in the Vatican and elsewhere - who want the truth to be known.


"The third chapter is titled: "Reform? What Reform? ". Describes in detail how the reform has been completely blocked by the powerful curial figures with which Francesco has deliberately allied himself. In the first place, the reform of the curia has been frustrated, in particular the intention to reduce the exaggerated powers of the secretariat of state, which is now more powerful than ever under Cardinal Parolin. Secondly, the broken promise to act against the scandal of pedophile priests: there have been known cases of priests who have been protected by prominent figures of the curia. Thirdly, the complete inversion of the financial reform that had been imagined when the new Secretariat for the Economy was established by Cardinal Pell. He was opposed by a small group of cardinals who did not want to give up their control and managed to defeat him. The dismissal of the Vatican's general auditor, Libero Milone, was another victory for those who oppose reforms. Why did it happen? Because Pope Francis, who was elected to reform the Church, has discovered that he can control the curia more effectively through the corrupt figures that depend on him for power. They obey him blindly." ~Colonna

This account is given further credence by a report which appeared in The Tablet reported Sexual abuse survivor Peter Saunders has resigned from the Pontifical Commission for the Protection of Minors, set up by Pope Francis to make recommendations on the Church’s role in child protection.


“I’m disappointed that the commission didn’t do what I thought it was set up to achieve, and there is still a huge amount of work that needs to be done.
There was a bit of a misunderstanding about the commission’s role, but I thought the Pope was serious about kicking backsides and holding people to account. I believe the Church deserves better on this.”

Saunders said to The Tablet.

Fellow abuse survivor Marie Collins, who left the commission in March citing frustration with some officials in the Curia, tweeted about Mr Saunders’s resignation on Wednesday:

Strange timing as the term of office of all current members of the Commission ends in four days time 17th December anyway. Good luck for the future Pete. https://t.co/G7zXacVHYt
— Marie Collins (@marielco) December 13, 2017

One should bear in mind that this piece was written by Christopher Lamb, who is far from reliable or objective where Pope Francis is concerned, see here for example.

Meanwhile the Catholic Herald has also been corresponding with Colonna via email where he claimed that the Pope had been given a list of possible names.

“A person in England was misidentified as the author at one point and immediately received threatening telephone calls from Rome,” Colonna said. “I now hear that Vatican officials have laid before the Pope a shortlist of six people who they think may be the possible author. I suspect that it’s not for the purpose of awarding a literary prize.”

This does strike me as a little strange. The Vatican is ringing random people up in England and accusing them of being the author of a book? I know if I got such a phone call I would read the caller the riot act! What right have the Vatican got to be doing such a thing?

Asked whether he thought his anonymity would last, Colonna said: “Under the present Pope, the Vatican machine has taken espionage to a new level, and I have little doubt that they will unmask me eventually, perhaps after a few more false casts. But they will need to ask themselves whether it is at the cost of giving me more publicity.” This is something I have heard from everyone I know who has any connection with Rome.