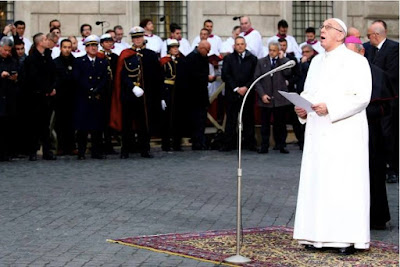 So you've all seen this story by now I'm sure, here in The Catholic Herald

Pope Francis has called for the Italian translation of the Lord’s Prayer to be changed as it implies God leads people into temptation.

The line, which is traditionally translated into English as “And lead us not into temptation”, was recently changed in French to say “do not let us enter into temptation.”

Currently, the Italian translation is rendered in the same way as the English, implying a change in the English version may also be coming.

Asked about the change on French TV, the Pope said the traditional phrasing is “not a good translation”.

“I am the one who falls. It’s not him pushing me into temptation to then see how I have fallen,” he said. “A father doesn’t do that, a father helps you to get up immediately. It’s Satan who leads us into temptation, that’s his department.”

The current English translation has two things going for it: it’s an accurate rendering of both the NT Greek and the Latin; & it is hallowed by age and widespread use. I wonder whether either of these matter to the Pope.

As soon as I read this story, I reached for my well thumbed copy of Ratzinger's Jesus of Nazareth. I recall the Pope Emeritus' writing on this very subject saved me in my final exams in Spiritual Theology which I sat at Allen Hall a good few years ago. I think it is well worth quoting at length, because, if nothing else, Pope Francis' suggestion presents an opportunity for catechesis in this regard: as Ratzinger points out from the beginning:
"The way this petition is phrased is shocking for many people: God certainly does not lead us into temptation. In fact, as St. James tells us: "Let no one say when he is tempted, 'I am tempted by God'; for God cannot be tempted with evil and He Himself tempts no one" (Jas 1:13).
We are helped a further step along when we recall the words of the Gospel: "Then Jesus was led into the desert was led up by the Spirit into the wilderness to be tempted by the devil" (Mt 4:1).
Temptation comes from the devil, but part of Jesus' messianic task is to withstand the great temptations that have led man away from God and continue to do so. As we have seen, Jesus must suffer through these temptations to the point of dying on the Cross, which is how He opens the way of redemption for us. Thus it is not only after His death, but already, but already by His death and during His whole life, that Jesus "descends into hell," as it were, into the domain of our temptations and defeats, in order to take us by the hand and carry us upward. The Letter to the Hebrews places special emphasis on this aspect, which it presents as an essential component of Jesus' path: "For because He Himself has suffered and been tempted, He is able to help those who are tempted" (Heb 2:18). "For we have not a high priest who is unable to sympathise with our weaknesses, but one who in every respect has been tempted as we are, yet without sin" (Heb 4:15).
A brief look at the book of Job, which in so many respects prefigures the mystery of Christ, can help us clarify things further. Satan derides man in order to deride God: God's creature, whom He has formed in His own image, is a pitiful creature. Everything that seems good about him is actually just a facade. The reality is that the only thing man--each man--ever cares about is his own well being. This is the judgement of Satan, whom the book of Revelation calls "the accuser of our brethren...who accuses them day and night before our God" (Rev 12:10). The calumniation of man and creation is in the final instance a calumniation of God, an excuse for renouncing Him.
Satan wants to prove his case for through the righteous man Job: just let everything be taken away from him, Satan says, and he will quickly drop his piety, too. God gives Satan the freedom to test Job, though within precisely defined boundaries: God does not abandon man, but He does allow him to be tried [my emphasis here]. This is a very subtle, still implicit, yet real glimpse of the mystery of substitution that takes on a major profile in Isaiah 53: Job's sufferings serve to justify man. By his faith, proved through suffering, he restores man's honour. Job's sufferings are this by anticipation sufferings in communion with Christ, who restores the honour of us all before God and shows us the way never to lose faith in God even amid the deepest darkness.
The Book of Job can also help us to understand the difference between trial and temptation. In order to mature, in order to make real progress on the path leading from a superficial piety into a profound oneness with God's will, man needs to be tried. Just as the juice of the grape has to ferment in order to become a fine wine. so too man needs purifications and transformations; they are dangerous for him, because they present an opportunity for him to fall, and yet they are indispensable as paths on which he comes to himself and to God. Love is always a process involving purifications, renunciations, and painful transformations of ourselves--and that is how it is a journey to maturity. If Francis Xavier was able to pray to God, saying, "I love you, not because you have the power to give heaven or hell, but simply because you are--my king and my God," then surely he had needed a long path of inner purifications to reach such an ultimate freedom--a path through stages of maturity, a path beset with temptation and the danger of falling, but a necessary path nonetheless.
Now we are in a position to interpret the sixth petition of the Our Father in a more practical way. When we pray it, we are saying to God: "I know that I need trial so that my nature can be purified. When you decide to send me these trials, when you give evil some room to manoeuvre, as you did with Job, then please don't overestimate my capacity. Don't set too wide the boundaries within which I may be tempted, and be close to me with your protecting hand when it becomes too much for me." It was in this sense that Saint Cyprian interpreted the sixth petition. He says that when we pray, "And lead us not into temptation," we are expressing our awareness "that the enemy can do nothing against us unless God has allowed it beforehand, so that our fear, our devotion and our worship may be directed to God--because the Evil One is not permitted to do anything unless he is given authorization" (De dominica oratione 25; CSEL III, 25, p. 285f.)."
Quotation from Ratzinger, J., Jesus of Nazareth, Bloomsbury, U.K., 2007, pp. 160-163.

This text from Pope Benedict puts into stark contrast the difference between a Pope who knew both Scripture and Tradition and one appears to know or care little for either, save and except as proof texts to support his a priori assumptions.

When we consider the original translation, in the original Koine Greek, the verb means “to bring into” or “to lead into”: it’s in the active voice not the passive. It does not mean “do not let”, as Pope Francis suggests is a better translation. It isn’t: it means something different altogether. The Latin renders the Greek closely.

Funny thing about all this is that P. Francis himself said in a homily in 2014 that he prays God "throw a banana peel" in front of certain "rigid people" so that they fall into sin: https://t.co/ADR2FRQIru pic.twitter.com/quys13xJMo
— Andrew Guernsey (@aguernz) December 9, 2017