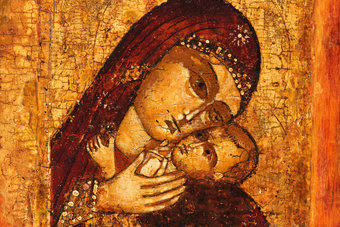 I have found myself in prayer this Christmas, reflecting on the scandal of the Incarnation. It really is the most unbelievable scandal, that we would presume to believe that the all powerful creator of the Universe, time, space, matter - the will that brought all things into being and keeps all things in being - should enter His own creation in such a meek and vulnerable form. However, any study of the early Church reveals that the first Christians did not doubt that Christ was God, what they struggled with was the extent to which He was in fact man. It seems extraordinary that the situation has somehow inverted itself today.

The doctrine of the Incarnation holds that Jesus, the preexistent divine Logos and the second hypostasis of the Trinity, God the Son and Son of the Father, taking on a human body and human nature, "was made flesh" and conceived in the womb of Mary the Theotokos (Greek for "God-bearer"; Latin: Mater Dei, literally 'Mother of God'). The doctrine of the Incarnation, then, entails that Jesus Christ is fully God and fully human, his two natures joined in hypostatic union.

How could the human race go to God if God had not come to us? How should we free ourselves from our birth into death if we had not been born again according to faith by a new birth generously given by God, thanks to that which came about from the Virgin’s womb?

New birth, becoming, communion, adoption, union, immortality. These are the poetry of Christmas and salvation. The purpose of the incarnation, revealed in the nativity of Jesus, is to re-establish full communion between God and humanity. One of the most profound and incredible truths of this union is that it does not, however, abolish the distinct identities of God and humanity. It makes us real, authentic, fully human. And I think this is missing from a lot of Christian's understanding of a life lived in Christ. For only in God are we truly ourselves.