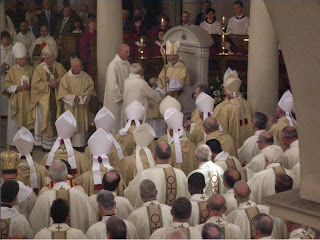 My Parish Priest said to me a long while ago, something like: 'Don't follow any one man, only follow Christ'. The conversation occurred within the context of my applauding a "media priest" who had impressed me on EWTN with a forthright exposition of the Gospel. I think Father's advice was really important and it has often resonated with me since. A priest's job is to be a man for others; to show Christ to the people, to diminish so that He can increase.

There are many who do this wonderfully and help us on the path to salvation. But there are many who do not help us to know Christ, and instead impose their own version or flavour of Christianity on us. This seems to be increasingly prevalent presently, contrary to secularists’ claim that Catholic clergy are nothing more than papal agents bent on enforcing rigid moral controls that smother our human instinct for pleasure and freedom.

Father Alexander Lucie-Smith has written an article in the Catholic Herald which looks at why trust in the clergy is plummeting prompted by statistics that find Britons are more likely to trust weather presenters than priests. He highlights a number of issues I'm sure we would all agree with:

1. Social change has led to a decline in clergy status. Once, the clergy were often the only highly educated men in their communities, and thus their words would have counted for much. Now, they are just one of many professions, one set among many qualified people.

2. The child abuse scandal, and the attendant cover-up. This cannot be stressed enough: the scandal did grave damage to the credibility of the Church. Because priests and bishops lied to cover up the misdemeanours of some, this created the impression that all clergy were quite prepared to be less than truthful if it suited their own ends. The child abuse scandal gave credence to the charge of hypocrisy, which sounds the death knell of respect for the clergy.

3. The decline in faith. This has damaged the credibility of clergy. If God is now seen by so many as either false or worse, malign, then the clergy take on the mantle of the snake oil salesmen of old.

It is interesting that Fr. notes:

that those who defend the clergy often do so in these terms: “The Catholic church has many strengths, including in its humanitarian work – after all, it has representatives across the planet, and for all the bad apples we’ve become increasingly aware of, there are many good men and women working tirelessly to improve the living conditions of people who live in challenged situations.” (Thus Joanna Moorhead writing recently in the Guardian.)

I think this is a very astute observation, akin to the one I made last week here. If the Church is simply an NGO which distributes aid, its' real mission and purpose become impotent. If priests are simply social workers, why do they need to be ordained at all?

How do we redress the balance? Fr. Lucie-Smith suggests that priests


ditch the clergy-speak, put away the parsonical accent, in other words get rid of the sort of discourse that is so prevalent both in the Catholic Church and the Anglican Church. I do not mean the content of the discourse, but its manner of delivery. Priests and bishops need to speak to their fellow human beings on a level playing field, using a tone and a language everyone can understand.

I wonder if it is a case of language in reality? I know lots of priests who communicate perfectly well. I might venture that one problem is the way many are overtly focused on issues which seem so irrelevant to many people. Issues such as liturgy and law, etc. These issues are NOT irrelevant, but at the current level of catechesis among lay people, they appear so. Now I know I talk about these issues here quite a bit, but I've spent quite a bit of time studying them (and I still don't know very much!).

I think that the more you understand, the more important issues like how we receive Holy Communion, or the orientation of the priest saying Mass become. But when Cardinal Nichols has nothing to say about issues which affect every family in this country, issues which are at the forefront of the philosophical and theology debate about what it means to be human and a community, issues like trans-sexuality, and yet jumps down Cardinal Sarah's throat immediately he suggests that it might be an idea if Mass was said with a little more reverence and focus on the divine presence, it seems obscure and out of touch to the majority of people in this country I would suggest.

Another issue is related to cliques. It has been my experience that a lot of priests who have gone down the Justice & Peace avenue and have ultimately conflated Socialism with Catholicism, hold a sort of clique. They have a vision of what it means to be Catholic, and if you don't conform to that vision, you're excluded often in an extraordinarily vehement way. This vision is nothing to do with doctrine or dogma, it is much more vague than that.

I think a lack of authenticity is a huge problem. Embracing a "social justice" manifesto and desperately trying to conform Catholic teaching to a modern perspective completely at odds with it doesn't work: it just makes clergy look disingenuous (obviously this is related to Fr. Lucie-Smith's snake-oil salesman comment). I don't know if these modernists  believe the Gospel or not. I think quite a few lack the knowledge to address some of the issues, nevertheless their attempt to play down the Gospel is always counter-productive in my experience.

Finally, I would argue that a lack of leadership and sound stewardship has led to a collapse in confidence. Our bishops are largely silent (except for Davies, Egan and occasionally Campbell and O'Toole). When the rest say anything, it usually amounts to little more than platitude and vagary which tries to play both sides and the middle, a tactic which has resulted in decades of slow loss of the intellectual and social ground.

What better example could I give than my diocese' newly released "Development Strategy" which was published with details of parish closures before any of the clergy knew what was being proposed. It has been intimated that clergy did not engage with the process and so were ignorant of the proposals, but I know some who were consulted, gave their position, and the opposite went in the document irrespective of this consultation. Regardless, I have heard from numerous clergy concerned about where they are going to live once the changes take place. Brentwood Diocese has more Ordinariate clergy than any other diocese in the country, but they are not even mentioned in the document, which paints an unrealistic picture of health across the board. Some of the proposals seem utterly unworkable, like my own Parish and the neighbouring parish of Eastwood, which both currently have four Sunday Masses (including the vigil) and is proposed that one priest will cover both. Or the poor fellow who gets Dengie and will be running four parishes on his own! Bishop Williams has stressed this is just a proposal, but what's the point in a proposal that cannot work, contradicts or upsets clergy? Why wouldn't you make sure clergy knew before you published something like this? It all seems very difficult to understand and frankly looks like a mess. Irrespective, having watched the way the Church works for a number of years, the fact that this makes the diocese look inept will not matter and the whole thing will likely be brushed under the carpet and forgotten.

The question is, do we continue to put up with this sort of thing? We who built our schools and pay 10% of their running costs despite the fact that they are a factory of failure in respect of the purpose for which they were built? We who pay for the upkeep of our Churches, who leave legacies to ensure they will be there for future generations of Catholics, when little or nothing seems to be done to foster vocations or evangelise our communities? You might ask what option we have, but I think we do have options, largely born out of a conversation I had with Mgsr Paul Watson at Maryvale a number of years ago about Parish Priests who teach contradictory to the faith: abandon the bad, rally to and support the good. This week I came across a very heartening manifestation of this mantra, which I will blog about shortly and link to here.