Who will defend the Church? 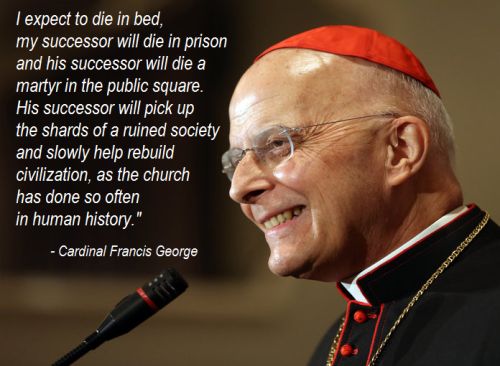 I had a great weekend, on Saturday meeting up with a bunch of committed Catholic friends for a paintballing session deep in the Surrey woods, and on Sunday after Mass, meeting up with my Catenian brothers for our Christmas lunch.

To be honest I'm swamped with material like this. I feel I have a duty to draw your attention to the dangerous things going on in our Church at present, but on the other hand, I also have a number of positive things I want to report on. I can't find the time to keep up with all the negative stuff, let alone gather my thoughts enough to write something positive and uplifting!

One example is the dreadful nativity scene at the Vatican which everyone seems to be furious about.

The real problem with the Vatican nativity is that once again the core gospel: The Incarnation of Christ the Son of God--is sidelined so that a religion of good works becomes the message.
— Dwight Longenecker (@dlongenecker1) December 17, 2017

Raymond Arroyo thinks it is just weirdy-beardy (as we used to say when we were kids):

The Vatican's Nativity scene is a bit on the bizarre side this year. It features a crumbling church wall w/dead, bloodied bodies strewn about. I get the 7 corporal works of mercy message...but at Christmas people want to reflect on the Birth of Christ; not a medieval ER. https://t.co/jVmhR8q58u
— Raymond Arroyo (@RaymondArroyo) December 16, 2017

Frank thinks it is sacrilege:

'Macabre Sideshow: What can one say about this scattered and disoriented Vatican Nativity other than it is sacrilegious and shows the spiritual emptiness of Francis and his cohorts.' https://t.co/79gpiA5ABJ @HereIsJorge
— Frank Walker (@CanonTwoTwelve) December 14, 2017

Patrick Madrid thinks the scenes don't belong in a Navity:

Who's in charge of designing/approving Vatican manger scenes? This year's naked-guy rendition is just bizarre. Jarring, discordant & chaotic, it's not even Baby Jesus-centered. Yes, the extra bits are meant to depict works of mercy, but why? They don't belong in a Nativity scene. pic.twitter.com/OOygf0n1uV
— Patrick Madrid (@patrickmadrid) December 13, 2017

Some think it is the nativity of the apocalypse:

#Nativity Scene at the Vatican! 😱 The "Seven Corporal Works of Mercy" have been added, but it looks like mockery! Bombed-out church, falling star, naked man, dead corpse too? Is this Christmas or the Apocalypse? https://t.co/56e2THA324#Catholic #CatholicChurch in trouble. pic.twitter.com/F2m6tvZZHn
— EA Bucchianeri (@EABucchianeri) December 13, 2017

Even the Tablet seem gobsmacked: 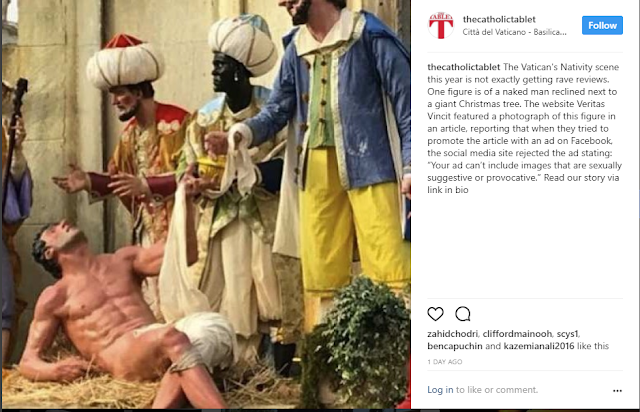 We are an Incarnational faith. The key difference between Christianity & the other Abrahamic faiths is the utter immanence of God Incarnate as juxtaposed with the utter transcendence of God immutable and distant. The Christian God, the God of Abraham, of Isaac, of Joseph, is "Emmanuel" - that is "God with us". A real historical presence in time and space. But here, as Fr Dwight points out, His Incarnation has somehow been superseded by the more important works of mercy.

Fr. Dwight doesn't mind the nudity and gore on display next to the shepherds and Wise Men (has Epiphany come extremely early in Rome for some reason?). I am not being prudish when I say I do mind, because as many others have pointed out, they just seem completely out of context. Some have also speculated whether they point to a more sinister influence:

Was this commissioned by +Paglia too?
— Catholic Deplorable (@RigidPelagian) December 12, 2017

This is a reference to the homo-erotic mural commissioned by this Cardinal for his cathedral Church in Terni-Narni-Amelia, depicts homoerotic themes, transgender persons, prostitutes, drug dealers and other material highly inappropriate for a church setting.

On Sunday night then, reading these words really touched a nerve:


I want to root for these guys. I want to defer to them like a good little Catholic soldier, like a member of the laity who has no grace of state and no authority to do anything within the hierarchical structure of the Church. But I’m not wearing the red of a cardinal — a red, which, by the way, is supposed to remind them of their duty to shed their blood for the faith — and it’s hard for me to feel as respectful as I should towards these men when they won’t even, as one commenter I saw put it, shed ink for the cause. If they believe the pope is promulgating heresy, they have a solemn duty to act, even if they think they’ll get the St. John Fisher treatment.

I really identified with this post by Steve Skojec and increasingly I feel it speaks to one of a number of seriously deficiencies in contemporary Catholic life. Men and maleness are just not allowed really, and all the gay imagery, hand-wringing social-justice advocacy, flower-arranging and singing high-pitched hymns only serves to continue to marginalise us. Seems incredibly ironic in what is often depicted as a rigid patriarchal hegemony, but it does explain a lack of vocations and low Mass attendance from men especially (ask any priest, they'll give anecdotal evidence that this is largely the case) and families who lack the essential influence of a faithful Catholic father.

And this is the way all the men I was with yesterday feel. Utterly abandoned by the Church. We believe what the Church teaches and has always taught at great personal cost, but the Church doesn't exist outside our own fraternity and in a few orthodox pockets

So here we are, the lions led by donkeys, desperately hoping they will stand up for us, for the faith they represent, for the Church they serve, all to no avail. All we can do is continue to band together, to pray and hope, and to speak out in the hope that God will send some brave martyr to stand up for His Church. Although I wouldn't be surprised if there was a good bit more purgation required before we start to build things up again from scratch. We need to burn out this infection root and stem.

By ordering those documents published in the AAS Jorge Bergoglio and Parolin have directly attacked Holy Mother Church. It behooves all the sons of that Immaculate Bride to protect her from their vile outrages and save Her from their adulterous hands! Rise up! Rise up! Rise up!
— Veri Catholici (@VeriCatholici) December 5, 2017