A Litany of Papal Errors 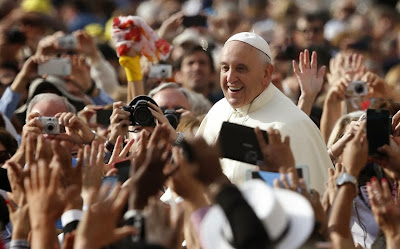 Pope Francis routinely honours, welcomes, greets, and entertains public sinners. No doubt many see in this imitation of Christ:


When the Pharisees saw this, they asked His disciples, “Why does your Teacher eat with tax collectors and sinners?”

This makes anyone criticising things like his honouring of Dutch abortion activist Elisabeth Ploumen seem like the Pharisees in the Gospel. But St. Paul commands that the worst sinners are driven out of the community

“But now I have written to you, not to keep company, if any man that is named a brother, be a fornicator, or covetous, or a server of idols, or a railer, or a drunkard, or an extortioner: with such a one, not so much as to eat”

It is true that Christ ate with sinners, but He called them to repentance, something Pope Francis never does. Instead, he ignores their grave public sins and pretends all is well, saving his rebukes for those faithful to the Church.


"What nobody disputes is the fact of the situation, which is that Francis just flat-out knows what’s going on...which means...he gets all the credit when things go right, but also all the blame when they don’t."

Well let's have a look at what went on last week under this Pontiff who "who governs in the first person singular".

First there was Fr Chiodi new appointee to the Pontifical Academy for Life who reportedly said that there are “circumstances ­– I refer to Amoris Laetitia, Chapter 8 ­­– that precisely for the sake of responsibility, require contraception.”  When contacted by the Catholic Herald, Fr Chiodi did not deny making the remarks but said he preferred not to comment. Pope Francis revamped the academy, removing almost 100 members and appointing 45 new ones.

Church teaching forbids contraception under all circumstances. Pope Pius XI wrote that contraception is “intrinsically vicious” and that “the Divine Majesty regards with greatest detestation this horrible crime”. Pope Paul VI wrote in Humanae Vitae that “sexual intercourse which is deliberately contraceptive” is “to be absolutely excluded” and that “it is never lawful, even for the gravest reasons, to do evil that good may come of it”.


So did Pope Francis immediately contact Chiodi and tick him off as he did Cardinal Sarah when he suggested there should be more reverence in the liturgy? Did the CDF issue a statement correcting this error? We heard nothing but silence. In fact, Chiodi's opposition to settled Church teaching is well known, the Catholic Herald reported on it back in June. Should we pretend the Holy Father is unaware? It seems unlikely. Does it mean then that the Holy Father supports Chiodi's opposition to Church teaching?

We also had The vice president of the German bishops’ conference calling for Catholic clergy to bless same-sex unions. This is a bishop of the Catholic Church calling for the blessing of an objective moral evil. Canon Lawyer Fr Gerald Murray said on EWTN's The World Over Live that Bode should repent of this grave sin.

“This, and this is quite simply a statement of fact, this is a total rejection of Catholic doctrine on the immorality of homosexual activity,” Murray said. “For this bishop to say that is a major scandal. He should repent of it and turn away from it because he’s leading people into sin.”

“If I seem angry it’s because I am,” added Murray. “This is infuriating. A shepherd is sent out to lead the sheep to the pure waters of Catholic truth and this man is saying that immoral activity should be blessed? He needs to repent of that teaching.” Bishop against bishop, cardinal against cardinal.

So the CDF, naturally censured him, right? Pope Francis immediately issued a statement condemning his error then, right? Or perhaps he wrote an unprecedented letter, as he did to Cardinal Sarah not so long ago? If you think any of these things happen you are mistaken. Nothing happened.

The Vatican Secretary of State Cardinal Pietro Parolin said Amoris Laetitia is marked a “paradigm shift” for the Church. The cardinal did not clarify exactly what the “paradigm shift” involved, of course—he couldn't, because there is no logical explanation. This is the sole reason they're using the indefectibility argument now, and a *very* strict interpretation of it at that, is because they *can't* explain Amoris Laetitia's suggestions after months of trying. It's a complete red herring.

The cardinal made his remarks in an interview with Vatican News, the Vatican’s recently launched official media outlet. He is right that Amoris Laetitia is a paradigm shift; it is a political move to divorce the Catholic faith from the fides quae, objective truth, logic and reason. Notice also the complete lack of credible real-world pastoral examples where Amoris Laetitia would apply - strange for something touted as being so "realistic" eh?

Then there was the news that the Pope has appointed Cardinal Roger Michael Mahoney, archbishop emeritus of Los Angeles, as his special envoy at the celebration of the 150 th anniversary of the erection of the diocese of Scranton, United States of America, to take place on 4 March 2018.

Mahoney is an instrumental figure in working to cover up child sexual abuse in the USA. So much so, his successor forbade him from public ministry due to his woeful handling of abuse cases. The diocese Mahony is being sent to is known for loyalty to the true Faith. ++Chaput is presiding & preaching. They'll have asked the Holy Father for a Legate and it would seem that to send Mahony is a deliberate (and nasty) message.


But perhaps the worst gaff of the week was the almost unbelievable news that Pope Francis has made the Dutch politician and extreme abortion activist Elisabeth Maria Josepha “Lilianne” Ploumen a knight in the Pontifical Equestrian Order of St. Gregory the Great. 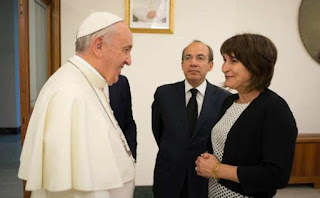 After considerable deliberation, the best cronies could come up with on this was to protest that it was unreasonable to suggest that Pope Francis personally took the decision to award a pro-abortion campaigner. Of course, in reality nobody thought that. What they thought & think is that this would have been inconceivable under John Paul II or Benedict XVI & Pope Francis must withdraw the honour now. He likely won’t, of course & we’ll all draw our own conclusions. When they eventually deemed to comment on the story, The Holy See Press Office said the Dutch militant pro-abortion politician Lilianne Ploumen was given the ancient papal honor as ‘diplomatic practice’ for a visiting official head of state delegation to the Vatican. This was a lie. The Holy See does not routinely give Papal awards to entourage of Heads of State: nor does any one else.

This wasn't an error or a matter of protocol