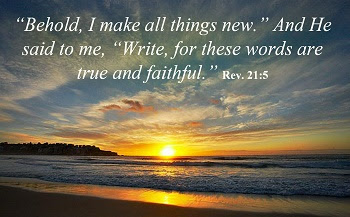 I hope you have had a happy and fulfilling Christmas. I love the New Year, it always renews my sense of what is possible. An opportunity to reflect on that which I want to change, where I want to put more focus, an exercise in what is possible. 2017 has been a challenging year for me, but overall I have finished the year with a renewed sense of purpose and direction. Midnight Mass on Christmas Eve was particularly beautiful and touching with a real feeling of being close to God Incarnate, Emmanuel - God with us (on that subject, Msgr Charles Pope wrote an outstanding blog explaining why Jesus was named Jesus, or in Aramaic Yeshua which means “Yahweh is Salvation” , rather than Emmanuel as Isaiah 7:14, which you can read here).

Over the Christmas break, I felt filled with enthusiasm and ideas. Having suddenly been forced to leave my work position in June 2016, I have been suffering some anxiety about what direction I should next take. Turning to what I know best, I started selling tools, abrasives and welding plant & consumables to factories and manufacturing outlets in the local area. I have managed to make a living at this and have seen some success. I am now fully committed to moving forward with this business and spent a fair bit of time over Christmas working on the business website which you can view here. If you know anyone who might be interested in our products, please do push them in my direction and say a prayer for the continued growth and success of our little business Scion Supply Ltd.

So a few resolutiony type things:

1. Read more books, watch less t.v.
2. Get out for more walks with the family, especially at weekends.
3. Be more active, get fitter.
4. Start a group of disciple-making-disciples at my parish.
5. Consciously put Christ at the centre of everything I do, pray that Christ guide & aid me in doing so.
6. Be more outspoken about bishops and priests who contradict Church teaching and lead the faithful astray.

3 bishops speak out against #Pope's interpretation of #AmorisLaetitia to allow some remarried divorcees access to sacraments, saying such a reading is causing "rampant confusion," will spread “plague of divorce” and is “alien” to Church’s entire Tradition https://t.co/0WPxeIE30T
— Edward Pentin (@EdwardPentin) January 1, 2018

The Kazakhstan Bishops call Communion for remarried "Alien to the entire tradition of the Catholic and Apostolic faith" as One Peter Five reports here. One year ago this month, these same bishops issued a joint statement urging the faithful to pray that Pope Francis would “confirm the unchanging praxis of the Church with regard to the truth of the indissolubility of marriage.”

The statement stresses that as bishops, they are conscious of a “grave responsibility” and “duty” to the faithful who expect from them “a public and unequivocal profession of the truth and the immutable discipline of the Church regarding the indissolubility of marriage. For this reason we are not allowed to be silent,” - Thank God! Fantastic! About time! Well done!

Canon Lawyer Dr. Ed Peters made no bones about the statement of the Kazakhstan Bishop's nature as authentic doctrine:


The presentation of Catholic teachings on marriage and morality set forth in the brief statement from Kazakhstan Bps. Peta, Lenga, and Schneider is quite sound. Indeed, in contrast to, for example, the ambiguous statement from the Argentines the Kazakhstan profession is a model of clarity; set against the disastrous statements by, among others, the Bishops of Malta and German episcopal conference the Kazakhstans are withering.

Later in the day, it was reported that two Italian bishops had joined them! 2018 really has started with a bang!

I've seen some stubborn lunatics saying What they'd really like to see would be a direct quote, unedited, of the Pope (in his own words) "allowing some remarried divorcees access to sacraments" which is a bit like St. Thomas saying "unless I can put my finger into the holes the nails made..." You get the feeling that reality plays no part to these people's chosen interpretation of what is going on in the Church, as perhaps demonstrated by Cardinal Coccopalmerio who has said that the Pope's interpretation of Amoris laetitia to allow Communion for some "remarried" divorcees doesn't contradict canon law because they have intention to change but can't because of circumstances. You have to scroll down to the bottom of this post from Edward Pentin to read his comments in full.

There was also the strange and really rather disturbing image distributed by the pope for new year as a warning against war and the news that despite sharp falls in attendance, the Church in Germany is sitting on a multi-billion dollar fortune yet lacks financial transparency, and is not properly resourcing Catholic hospitals. Without mentioning the continuing scandal of the homoerotic Vatican Nativity scene, the crèche, meant to portray the 7 corporal acts of mercy, was made in Montevergine, a town famous for its close links with Italy’s LGBT community. The scene has outraged many Catholics and, as on Christmas Day, a topless Femen activist tried to steal the statue of Baby Jesus, some Catholics commented that she blended perfectly with the scene! Honestly, you couldn't make this nonsense up!

Well I shall stand with Archbishop Tomash Peta of Astana, Archbishop Jan Pawel Lenga of Karaganda, Bishop Athanasius Schneider of Astana, Archbishop Carlo Maria Viganò, former apostolic nuncio to the United States, and His Excellency Luigi Negri, archbishop emeritus of Ferrara-Comacchio as 2018 begins, praying for these brave Catholic leaders. I will be watching and reporting closely on what goes on in the Church in the world as well as in particular here, good and bad, in the hope that Christ's people wake up and start to live their faith in Christ Jesus with the courage to turn away from those who would lie to them, or push them in a new or progressive direction, away from the truth deposited by Christ and His Apostles.

Just to give some context; there are about 4000 bishops in the world. A vast sea of well-fed faces all looking at their shoes. https://t.co/155fbVbPep
— Hilary White (@hilarityjane) January 2, 2018