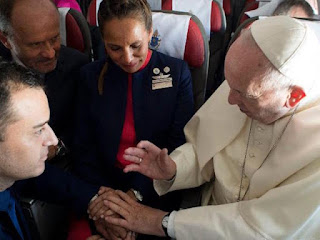 So, in a P.R. master-stroke, no one is talking about the extreme pro-lgbt, pro-abortion politician the Pope awarded a knight in the Pontifical Equestrian Order of St. Gregory the Great.

Now everyone is talking about a spontaneous marriage ceremony for a Catholic couple living in a civil, non-sacramental marriage for at least seven years it seems, during a flight in Chile today.

The fact that unqualified Vatican PR staff immediately had to assure everyone the marriage was perfectly licit is practically a guarantee that it wasn't:

It is interesting to note, however, the couple’s account seems to contradict the director of the Holy See’s press office, Greg Burke, who told the press that “it was not the pope’s idea. It was their idea, but the pope was happy to do it.


Based on the reports offered here and here, I cannot tell whether the ‘wedding’ that the pope put together for an unsuspecting couple satisfies Church requirements on marriage, and several other laws impacting the liceity of marriage seem simply to have been disregarded in the event. As happened several times under earlier administrations, a representative from the Vatican Press Office assures us that “everything was valid”. Such assertions by canonically unqualified and unauthorized PR staff carry, of course, no weight. Real questions worthy of real answers are still raised by this event.
The above reports mention, as far as I can see, only the pope’s broaching the topic of marriage by asking the couple whether they wanted to be married, placing their hands together, saying a few inspirational words about marriage, and pronouncing them husband and wife. But such a sequence describes, not at all, a present exchange of consent by the parties. Let us hope, then, that in the actual event considerably more was said than has been reported.
Second, canonical form demands two independent actual witnesses to the exchange of consent, meaning that five persons must be immediately present for the wedding—not folks who heard about it a few minutes later, or who saw something happening and wondered, hey, what’s going on back there?—but five persons acting together and at the same time: a bride, a groom, an officiant, and two other actual witnesses. While reports are unclear as to how many people actually witnessed this event, and while this photo shows four people in the event (plus a camera man?) and four signatures on a document, another photo shows five names on the marriage document, so one may presume (c. 1541) accordingly.
Third, several canons impacting the liceity of weddings (norms on ‘liceity’ often being regarded as wink-wink rules in Church life, especially when higher-ups model the wink-winking) were apparently ignored here, including: the requirement for serious pastoral preparation prior to a wedding (c. 1063), administration of Confirmation before Matrimony (c. 1065), urging of Penance and holy Communion before a wedding (c. 1065), verification that no obstacles to validity or liceity are in place (c. 1066), securing evidence of the contractants’ freedom to marry (c. 1068) upon pain of acting illicitly without it (c. 1114), an expectation that Catholic weddings be celebrated in a parish church (cc. 1115, 1118), and making use of the Church’s treasury of liturgical books for celebration of the sacramental rite (c. 1119).
As this story reverberates ‘round the world, now, deacons, priests, and bishops who try to uphold Church norms fostering values such as deliberate marriage preparation, an ecclesial context for a Catholic wedding, and the use of established and reliable texts for expressing consent will, undoubtedly, have the Podest-Ciuffardi wedding tossed in their face as evidence that, if Pope Francis does not insist on such legalistic silliness and only cares about whether two people love one another, why shouldn’t they do likewise? The ministry of conscientious clergy in this regard just got harder.
If I have to say it, I will: I hope Podest and Ciuffardi are married and that they live happily ever after, but I worry whenever momentous life decisions are taken on a minute’s notice and under circumstances bound to contribute to one’s being carried away by events.
The pope has opined, apparently more than once, that “half of all sacramental marriages are null”. Here’s hoping that Podest and Ciuffardi beat those odds.

This is a crazy stunt. HIS OWN ENCYCLICAL Amoris laetitia repeatedly talks about the need for “long term and short term marriage preparation” before couples enter into the sacrament of marriage, which is a lifelong and unbreakable bond -- advice that DIRECTLY CONTRADICTS his actions here, spontaneously marry two people of whom he has no prior knowledge!


“Another great challenge of marriage preparation is to help couples realize that marriage is not something that happens once for all. Their union is real and irrevocable, confirmed and consecrated by the sacrament of matrimony. Yet in joining their lives, the spouses assume an active and creative role in a lifelong project,” ~ Pope Francis, Amoris Laetitia

The greatest tragedy about this PR stunt (which, as I said at the start of this blog has drawn attention away from the Ploumen thing quite successfully) is how it undermines deacons, priests, and bishops all over the world who try to uphold Church norms fostering values such as deliberate marriage preparation, an ecclesial context for a Catholic wedding, and the use of established and reliable texts for expressing consent.