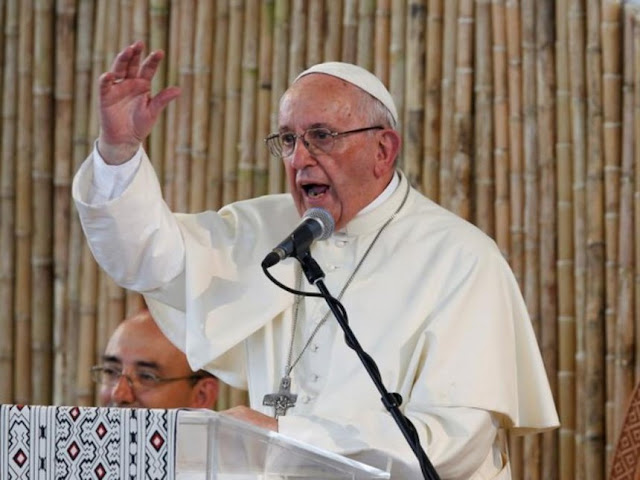 In December 2013, Pope Francis sparked hope that the Catholic Church was taking the scandal of clerical sexual abuse seriously as he created a group to advise him and future popes on how the church worldwide could protect children, appointing experts on the issue and even survivors of abuse to a new Pontifical Commission for the Protection of Minors.


Four years later that commission has lapsed into an inactive state. Its members' terms of office, as set by the group's Vatican-approved statutes, expired last December (2017). Neither the pope nor the Vatican have made known when or if the current members will be reappointed or new members found.

That Francis has allowed this lapse to occur has been broadly criticised from all quarters of the Catholic Church as deeply troubling. A commission without validly appointed members ceases to be a commission; its members may carry on their work but if they do, they do so as individuals without legal standing or vested authority to back them. What work could they carry on? This never should have been allowed to happen.

The fact the Vatican felt no need to offer an official explanation is equally troubling, because it suggests that the protection of children is not as high a priority as statements from the Vatican led us to believe it was. It seemed they'd started to get the message and were working to resolve it. Now it appears that decision makers in the Vatican did not realise — or didn't care — that this lapse would be perceived negatively. Not good either. A lack of an official response sends a tone-deaf and disappointing message to Catholics and the world. It points to the causal negligence at the heart of the scandal that has plagued the church for decades and demonstrates why the church can't shake allegations that its leaders "just don't get it."

The reality is that Pope Benedict was the best at removing perverts from the priesthood. Even the BBC said so!

It increasing looks like the Pontifical Commission for the Protection of Minors was little more than empty words, a PR stunt to get people on side. Marie Collins was one of the Commission's members who resigned in 2015 due to frustration with Vatican officials' reluctance to cooperate with the commission's work to protect children and care for survivors, you can read about it here.

[1/2] In labelling @jccruzchellew and his fellow Cillean survivors as guilty of slander the Pope has alligned himself with Cardinals Ezzati and Errazuriz who in an exchange of derogatory e mails in 2015 conspired to block @jccruzchellew consideration for membership of the #PCPM
— Marie Collins (@marielco) January 20, 2018

[2/2] admitting the e mails were authentic they never apologized for the way in which they referred to a survivor @jccruzchellew or to having worked to interfere with the Commission nor did they receive any sanction for their underhand behavior. https://t.co/F0Vm0rohxz #PCPM
— Marie Collins (@marielco) January 20, 2018

This is real evidence which causes a serious problem for Pope Francis. Collins also posted a link to the email exchange between the Cardinals:

You can read a translation of the emails on Marie Collins' website here.

Perhaps the real import of this papal error is made clear by the fact that Cardinal Sean O'Malley of Boston, one of the Pope's inner circle of Cardinals, has rebuked the Holy Father over his comments in Chile. On April 13, 2013, Pope Francis appointed Cardinal O'Malley as one of eight Cardinals of the Council of Cardinal Advisers to help the Pope govern the Catholic Church and reform its central administration.

O'Malley's rebuke has even been picked up by the secular press, the Daily Mail in the U.K. stating:


The Pope’s top adviser on clerical sex abuse has implicitly rebuked the pontiff over his accusations of slander against Chilean abuse victims, saying that Francis’ words were “a source of great pain for survivors of sexual abuse”.
Cardinal Sean O’Malley, the archbishop of Boston, said he could not explain why Francis “chose the particular words he used”.

This is the second time this week a Cardinal has rebuked the Pope. Perhaps the cracks are starting to show? O'Malley insisted the pope "gets it" and is committed to "zero tolerance" for abuse. At thus stage I have to say I think O'Malley's assessment is wrong. The Pope doesn't get it on a whole range of issues and what is needed is for the cardinals to start being honest about it and standing up to him!
abuse crisis Chilean Bishops Marie Collins Pontifical Commission for the Protection of Minors Pope in Chile slander