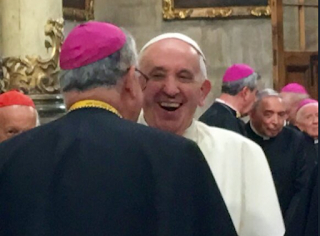 It shows just how polarised things are between (in my opinion) those of us who are faithful to the Church and honest about the present situation and those who are sycophants with an agenda. What agenda? Well, some clearly want to change the Church; modernise it.

Some have invested so much time and effort into refuting criticisms of this papacy, to show any crack of acknowledgement at this stage would constitute a totally collapse in credibility:

It is Austen Ivereigh who draws Fr. Longnecker's attention in his blog post. He notes that Austen


...trumpets that “Pope Francis on Wednesday night gave one of the smartest addresses of his pontificate, one that gives Catholic educational institutions a clear direction for our times.”

But has to admit that in reading the article it seemed that if this was one of the Pope’s smartest speeches you really wouldn’t want to read his dumber ones!

...this is a pope and he’s speaking in a pontifical university. Is there nothing to be said about the Catholic faith, the preaching of the gospel of Jesus Christ, the cultivation of Catholicism and the evangelization of culture? Perhaps it was there, but Ivereigh didn’t fit it into the article

Fr. Dwight isn't the only one left scratching his head, both at the strange incoherence of the Pope's ramblings and at Ivereigh's ebullient praise.
Austen Ivereigh Father Dwight Longnecker Pope in Chile