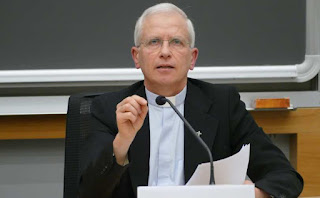 There are some people who still think that people are being rude and nasty about Pope Francis and Amoris Laetitia.

"You've never liked him" come the school playground retorts to the stream of anti-Catholic news coming out of Rome.

"Amoris Laetitia is perfectly orthodox, Cardinal Müller said so", they whine, failing to recognise the very function of the pope is to dispel confusion and reinforce truth. The fact the Pope has said nothing to the proliferation of alternative interpretations of his Apostolic Exhortation seems to completely pass them by.

When news broke last year that a group of theologians had been commissioned with reviewing Humanae vitae, the prophetic and continuously controversial encyclical of Pope Paul VI which condemned artificial birth control, they dismissed it as rumour being spread to further damage Pope Francis' reputation. Indeed, Italian Archbishop Vincenzo Paglia, (yes, he who commissioned his own homo-erotic mural, that's the one) who last year was appointed by the pontiff to head the Vatican’s Academy for Life and to serve as Grand Chancellor of the John Paul II Pontifical Institute (after he got rid of all the orthodox members) has denied that any such commission exists. Speaking with Argentine journalist Andrés Beltramo Álvarez, Paglia said, “There’s no commission, that’s all been made up.”

This interview was published online on July 13 in the Spanish Alfa y Omega. Paglia himself provided a translation into English via Twitter. Naive Crux journalist Inés San Martín used this as a stick to beat "conspiracy theorists" with, snootily saying:


it would have been easy enough to whip up a piece claiming it proves Paglia was lying, that there really is a secret cabal planning to gut Humanae Vitae, slap on a click-bait headline, and presto: A new Internet sensation is born.
As it turns out, though, picking up the phone to get the actual facts of the situation was just as easy.

Well San Martin is looking a little silly this morning as one of the new members of the Academy for Life states that Amoris Laetitia teaches that contraception is required.

As the ground has disappeared from under the feet of those still trying to defend the pope, they have tended to retreat to one of two positions, which, though fundamentally contradictory, both sides cite to support the other. One side says "Francis is pope and whatever he says supersedes everything any other pope has said" a la Scott Smith (who tried to offer a theological defence of AL which comprehensively failed and he then resorted to "he's the pope") and (somewhat bizarrely) pianist Stephen Walford, who has, over a long period of time now, engaged in insulting dialogues on social media and then written articles complaining about the way he has been treated!

Let this stand for my reponse to @walford_stephen ‘s accusations and insults to me. https://t.co/7ySIcHYbal
— Joseph Shaw (@LMSChairman) January 5, 2018

Walford's position was brilliantly satirised by Bruvver Eccles recently in a post entitled "Why the Pope is Right About Everything".

The other position defenders of Francis take is "Show me where Francis has said anything against the Magisterium?" This is frankly even more ridiculous, given that Cardinals and Bishops have done just that, as well as theologians and priests. What makes this position even more ridiculous is the changes Pope Francis makes in personnel and what they say. This is a perfect example: Reading Humanae Vitae in the light of Amoris laetitia.

Italian moral theologian Father Maurizio Chiodi said at a December 14 public lecture at the Pontifical Gregorian University in Rome that there are “circumstances — I refer to Amoris Laetitia, Chapter 8 — that precisely for the sake of responsibility, require contraception.”

As we have learnt from the Anglican Communion, Humanae vitae really is the bulwark against the acceptance of homosexuality as it defines the equal importance of the procreative and unitive elements of the marital act. Once you divorce these, you are left with pleasure for pleasure's sake (to a greater or lesser extent). Is this the ultimate direction of travel here in a Church choking in homosexual clergy seeking to adjust doctrine in order to justify their position?

It's OK though because the pope isn't doing any damage or attacking any doctrine.

The struggle and pain of faithful Catholics to accept Church teaching against the weight of secular opinion and ridicule is being utterly, utterly betrayed by each step this Pope makes. And each step undoes decades of teaching and effort by priests, bishops and catechists.

No doubt the thinking is the same as it was in the sixties: "take away the nasty rules and everyone will love us", but the rules make us free and what happens when you take away consistency, sacrifice and meaning from the Church - as we have seen demonstrated time and time again - is the salt loses its' taste and the people leave the Church.